Thando Mahlangu is suing the Gautrain operator, whose lawyers' letter 'is demeaning and condescending', after allegedly being manhandled off a train. 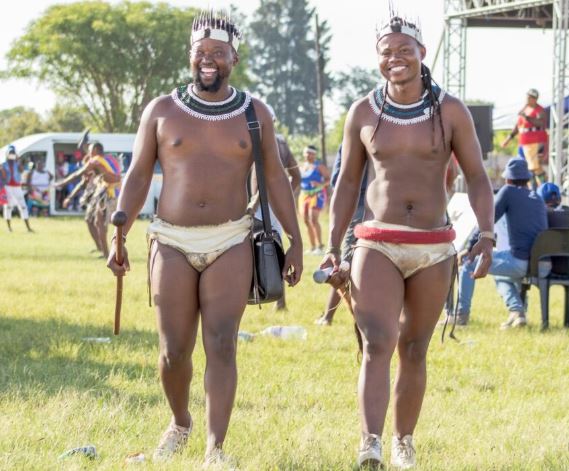 Ndebele activist Thando Mahlangu, right, wearing the exact traditional outfit he was wearing when he was kicked off the Gautrain. Picture: Twitter / Elias Eldira

In a response described as “condescending, derogatory and with racial undertones”, lawyers acting for the Gautrain operators claim Ndebele cultural activist Thando Mahlangu was barred from taking the train as he “was dressed in animal skin regalia which exposed his manhood …”

The 34-year-old is demanding R1.5 million in damages from Bombela Concession Company after he was allegedly manhandled and kicked out of Gautrain Park Station last month.

But despite a public apology by Gautrain to Mahlangu, it has made an about-turn, saying it can’t accept liability for the incident.

The contents of the letter of response from Whalley & Van Der Lith Inc, which The Citizen has seen, have enraged Mahlangu’s advocate, Nqabayethu Buthelezi, who said the letter has simply rubbed salt into the wound.

The letter claimed Mahlangu had ankle-high sneakers and a mining helmet on and was carrying a knobkerrie – which they said were not allowed on the train.

In the letter, dated December 10 and signed by attorney Barry van der Lith, the law firm denies that Bombela refused Mahlangu passage onto the train, saying he was not barred because of his Ndebele traditional garb but “was stopped in consequence of wearing a helmet and carrying a weapon”.

Bombela lawyers state: “Despite appreciating traditional Ndebele wear, which on the information available to us doesn’t entail white sneakers and a mining helmet, Bombela’s rules prohibit any helmets and weapons being taken on board the Gautrain.”

Mahlangu, the letter adds, could have been allowed had he not refused to take off his helmet and store his knobkerrie in a bag. “It is our instruction that he was always dealt with in the utmost respect and that it was his regalia which drew attention to him.”

Buthelezi said the “derogatory” letter had racist undertones and was demeaning to a black person.

“We are shocked to the core by the response,” Buthelezi said.

“It is extremely disrespectful and the contents of the letter as well as the tone of the language is demeaning. We ask ourselves how Mahlangu was allowed on the train in Pretoria when he had his manhood exposed. That is public indecency.”

He said the letter also made Gautrain guilty of crimen injuria, saying it had been sent to Transport Minister Blade Nzimande for intervention.

Park station closed due to protests, Gautrain customers urged to use alternative routes
4 months ago
4 months ago

Park station closed due to protests, Gautrain customers urged to use alternative routes
4 months ago
4 months ago