Forensics for Justice warned that trouble could erupt in the community, as some people have been told that the payments have already been made. 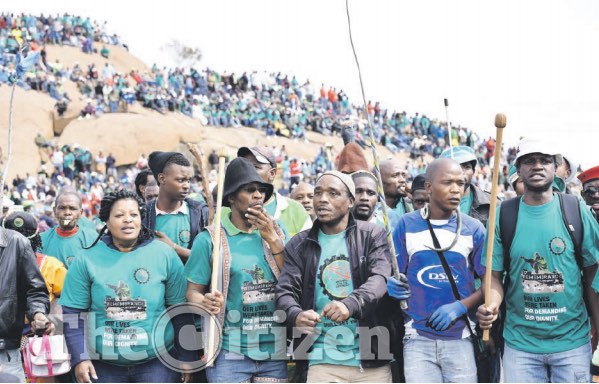 Union members gathered at Wonderkop in Marikana after members of the SAPS were instructed to open fire on striking mineworkers. Picture: Nigel Sibanda

President Cyril Ramaphosa has been asked to intervene after it emerged that a number of families of those who were killed in the 2012 Marikana “massacre” would spend another Christmas without the compensation they were promised.

Lobby group Forensics for Justice wrote this week that it was shocked and appalled that more than six years after the Marikana incident, the survivors – who were awarded settlements of R365 000 or R465 000, depending on the circumstances of their cases – had not yet been paid.

The Khulumani Support Group, a post-apartheid reconciliation group, wrote to Ramaphosa requesting an urgent engagement with the president. They intend to represent the widows of the miners who were killed during the wage protest, which culminated in police opening fire on over 200 miners, injuring dozens and killing 34.

In a letter addressed to Ramaphosa, the group called on government to fast-track the repayments as a matter of urgency.

“We call upon the state attorney and/or the police to effect payment without any further delay so that these poor people can start to rebuild their lives.

“We are also kindly requesting a formal response to our request for a meeting, coordinated by Khulumani Support Group, with the widows of the Marikana massacre with whom we have worked in a collaboration for healing, justice and reparations since … August 16, 2012.

“To date, we have had no response to this formal request to the presidency.”

Similarly, in a letter to the state attorney’s office in Pretoria, Forensics for Justice warned that a failure to make the payouts soon, in light of the fact that many beneficiaries had already been told that the payments had been processed, would cause tension in the impoverished North West province mining community of Marikana.

“Some of the claimants have been informed that the payment has been made already,” said Sarah-Jane Trent, Forensics for Justice’s executive director.

“This is clearly not true and it has the potential to stoke trouble in the area, which may even boil over into the community again,” said Trent.

“If this happens, the state will again be held accountable as same would be avoidable if payment was already made.

“For a person living in a very poor community, the amount of R360 000 or R460 000, as the case may be, is a short-term life-changing amount of money and it not only puts food on the table, it helps the claimant to start to get back some form of normality in their lives.”