Forty-two people died every day over the period. 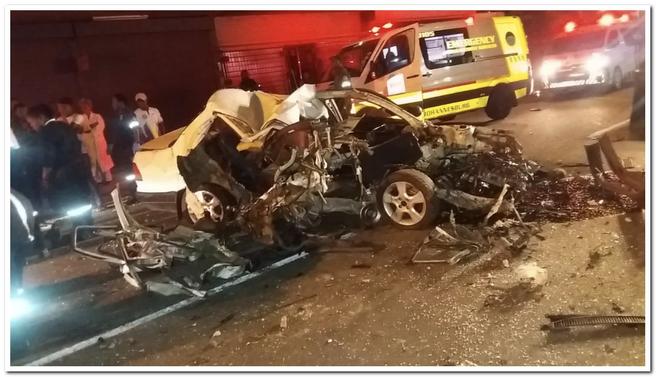 January 13 - A man was killed and two other people were injured in a head-on collision between a car and a front-end loader at the Main Reef and Denver roads intersection in the Johannesburg CBD on Saturday night. Photo: ER24

South Africa’s roads claimed 42 people daily during the festive season, as compared to 36 people per day in the previous year – a figure that should not be taken lightly, the Justice Project South Africa (JPSA) said yesterday.

Transport Minister Blade Nzimande announced in Pretoria yesterday that road crashes increased by 2% between December 1, 2018 and January 8, 2019, leading to an increase of 7% in fatalities.

Road deaths were reduced by the end of the festive period due to various interventions, as compared to mid-December, when fatalities stood at 16%, the minister said.

“Although we have not succeeded in achieving the goal of a 10% reduction in fatalities over this period, we will continue to take incremental steps until we reach our goal,” Nzimande said.

According to preliminary figures, 1,612 people died in 1,286 road crashes. The Northern Cape, Free State and Eastern Cape provinces recorded the highest percentages, while Gauteng and North West showed a 19% and 2% decrease, respectively.

The majority of the fatal crashes were due to “human factors” such as drink-driving.

JPSA’s Howard Dembovsky said: “We should not be satisfied about a 17% increase in the daily fatality rate. It is glaringly obvious that the RTMC, together with the department and the minister of transport, continue to do the same things and expect different results.”