‘God must take me,’ an elderly Makhanda woman cried out when NGO Gift of the Givers left town after a R10 million row over a water project. 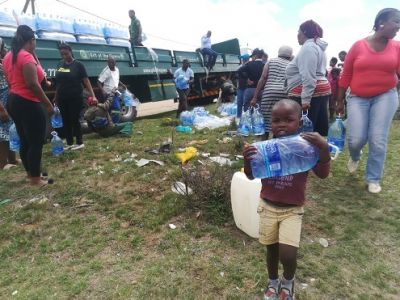 Residents of Makhanda, formerly known as Grahamstown in the Eastern Cape, have called on government to intervene in what they call a “broken town” in the throes of a water crisis.

Despite this, the department of water and sanitation issued a statement yesterday, saying it was not responsible for how the Makana Municipality spends its water budget.

This was in response to allegations by NGO Gift of the Givers (GG), which claimed the town owed it R10 million for work done in relief efforts the municipality promised to pay back.

According to the Unemployed People’s Movement, a group founded in the university town, the municipality has been incapacitated by corruption for years, leading to severe service delivery backlogs.

“The ANC have looted the town’s money, year after year, with no consequences,” alleged the organisation’s chairperson, Skhumbuzo Soxutywa. “They have enriched themselves while impoverishing the town, leading to a collapse in its basic services.

“It was Gift of the Givers who brought relief to people of this town, who were without water for weeks and, when there was water, drinking water with heavy metals and faeces.

“The ANC could not accept that a charity could succeed where they had failed. Now Gift of the Givers has to leave and we again must be subjected to dry taps and contaminated water,” he said.

But the municipality said GG embarked on the project knowing the financial risks involved.

According to the municipality, the project was embarked upon as an “initiative” of council speaker Yandiswa Vara.

“This was during the period where the municipality was facing a double blow with the James Kleynhans Water Treatment Works not operational and the dams feeding the western side of town critically low,” said spokesperson Yoliswa Ramoloka.

The NGO’s intervention included drilling boreholes to get water to impoverished residents.

Yesterday, the municipality said it was in the process of finding ways to fund the repayment of GG, insisting it was against supply chain management regulations to simply pay a charity for work done.

It said money was granted to the municipality by the department earlier this year and consultants were hired to begin intervention work, just before the charity organisation intervened.

“In October last year, the department informed us that they would assist drought relief efforts by funding the drilling of boreholes,” said Makhanda spokesperson Anele Mjekula.

“In line with the Municipal Finance Management Act and the conditions of the grant, a proper process was followed in appointing a consultant as the first step. The consultant will complete an underground water study and register the boreholes already drilled.

“The tender was awarded following a proper and lawful tender process, to undertake the necessary environmental impact studies and assessment of the aquifer to determine the viability, scale and scope of drilling boreholes.”

But according to GG founder Imtiaz Sooliman, after bringing in specialist hydrologist Gideon Groenewald to successfully drill 15 boreholes, test water and install filtration systems, government told them it could only pay companies from services rendered.

But the municipality denied ever committing to paying a cent.

Sooliman said the group was told by the department that various companies would be paid for work he claims was done by them to the tune of R10 million.

“This is R10 million of taxpayers’ money handed out freely by the government to people as remuneration for work that Gift of the Givers did.

“Our hearts are with the people of Makhanda, the elderly, the women and children and everyone who waited so patiently for water but, as a matter of principle, we cannot continue.”

The group said residents of Nkanini and Pola Park had been left hanging with no taps or toilets.

“One 85-year-old woman said God must take her. These are old people whose houses were sold by the very same politicians.”

But according to Mjekula, water access had been restored in most parts of the town, although dam levels were still low near the CBD.