It’s gonna get ‘ugly’ at Ellis Park as Elton returns

Forwards guru Phillip Lemmer warns his Lions to watch out for a controversial Hurricanes tactic. 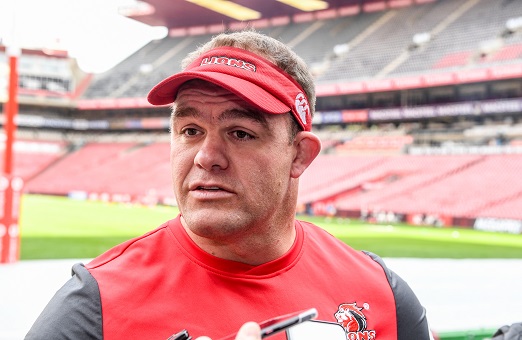 Expecting the breakdown to turn “ugly”, the Lions will need to be at their best this weekend as they don’t want to rely on other teams in order to qualify for the Super Rugby playoffs, according to forwards coach Philip Lemmer.

“It’s almost like knock-outs already, so we have to keep going and keep winning, and keep the team motivated and everybody on the same page to do their best at the end,” he said.

ALSO READ: Super Rugby XV of the week: No Elton, no problem

“The log is so close and anything can still happen until the very last game, so you need to keep the ball in your own hands. You don’t want to rely on other teams to win or lose at the end.”

The Lions named an unchanged starting line-up for their clash with the Hurricanes at Ellis Park on Saturday, with flyhalf Elton Jantjies on the bench.

He replaced Hacjivah Dayimani, with Shaun Reynolds being rewarded for a solid performance against the Stormers by retaining his place in the starting side.

“Shaun was good last week. He didn’t do anything wrong,” Lemmer said. “I think he is good for the team and good for the system, and we have to reward a guy when he does well.”

One thing they knew about the Canes, according to Lemmer, was that coach John Plumtree really focussed on the breakdown.

“They want to disrupt, they want it to be ugly and they want to be in your face, so it will start physically up front,” he said.

“The Sharks and the Canes are always physical. That’s how they play their game … and it will be a challenge this weekend.”

Lemmer did not seem surprised that the Canes had left star flanker Ardie Savea on the bench.

“We are not sure if they maybe want to put on a strong bench in the second half,” he said.

Star wing Aphiwe Dyantyi has extended his contract to 2021, the franchise announced.