The workplace is a fertile hunting ground for dodgy get-rich-quick schemes. 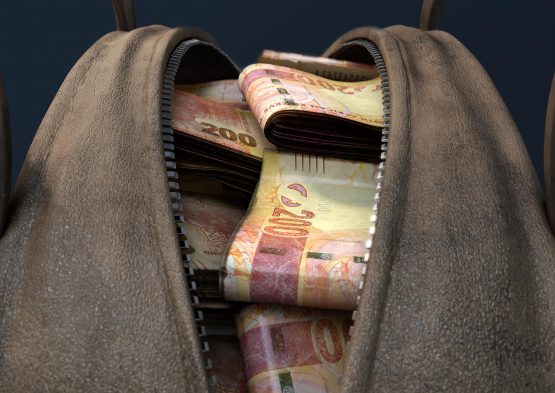 The problem is compounded if a member is recruited by a senior colleague. If an opportunity exists, the victim might try to recover their losses from the company illegally. Image: Shutterstock

As soon as one Ponzi scheme dries up, the purveyors again step up and get more ‘investors’ to hand over their hard-earned money.

They fall victim to being fleeced of their life savings, some investing the very little they have in hope of a better future.

The latest Ponzi scheme to hit the headlines is the WhatsApp stokvel group. Moneyweb has been following two of these groups for the past week, and it has been a strange and unsettling experience – easier to shrink from than describe. 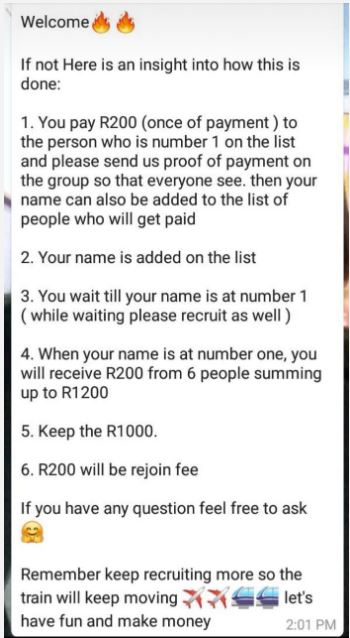 You are sent a WhatsApp group link, and instantaneously it’s as if you have stepped onto Wall Street. The investors are excited that a new member has joined the group.

The scheme promises a return of R1 000 in a day when you invest R200, with a claim that it is secure. But there is no real investment.

The group administrators recruit members, sending texts and WhatsApp voice notes throughout the day, encouraging  200 members to do the same if they want to receive their investment returns sooner.

The names of the members are listed to show how far they are moving up the ladder. The aim is to be the first person on the list so that the next six new members could deposit money into your account.

These members do not slumber as they are eager to receive their returns. Almost every member is in more than one group.

Their hunting ground is the workplace.

The groups disguise themselves as stokvels but are in fact Ponzi schemes, according to forensic auditor Eckhard Volker.

He says the workplace is the most seamless place to recruit new investors because the members rely on the constant introduction of new investors.

“The workplace provides a perfect hunting ground from a recruitment perspective. If, for example, every investor is required or encouraged to introduce new members [on a secret commission basis], a large corporate entity has many new potential victims.”

A Ponzi scheme is a fraudulent investment operation that pays returns to separate investors, not from any actual profit earned by the organisation, but from their own money or money paid by subsequent investors.

Volker adds: “Before the bubble bursts, the company will lose productive time when employees abuse their time and, usually, corporate facilities to recruit new members. The real implications, however, become clear only after the scheme has been exposed.”

He says this happens when an employee becomes unproductive as they are distraught about their financial crisis, which in turn undermines the morale of all their colleagues.

The employee often then turns to the employer requesting financial relief or even a salary advance.

Volker says the problem is worsened if the investor was introduced to the scheme by a senior colleague.

“If such a person was introduced to a scheme by a colleague, the personal relationship will be destroyed, which will also have a detrimental effect on the organisation and the morale.

“Under those circumstances, the office hierarchy is disrupted, and the employee has a personal problem with the boss, which becomes an operational problem for the company.”

Johannesburg-based Mpumie Maniga, who works for an engineering company, knows a lot about this.

She is in three WhatsApp stokvel groups and has not made any money.

To see a return on her investment, she needs to ensure that more people join the group – even if it means recruiting employees and friends.

“I have recruited my friends,” she says. “And some of my employees have been recruiting here at work, so there was no need [or opportunity] for me to recruit them.”

The Fraud Triangle Theory arose from a study by American criminologist Donald Cressey in the 1950s on how employees might commit fraud when they:

If controls are weak and an opportunity exists, the person might well try to recover the Ponzi scheme losses from the company through fraud.

This is why Volker is adamant that companies should stop Ponzi scheme recruitment in the workplace before it is too late.

He encourages companies to be aware of the following:

South Africa is not immune to Ponzi schemes, from the Travel Ventures International (TVI) scam investigated around 2012 to the MMM scheme that collapsed in 2016.

The South African Reserve Bank (Sarb) deals with 10-20 schemes annually and says this year it is trying to clamp down on 11. Its latest victory is that two of the TVI perpetrators have been convicted.

“It is something we need to do continuously,” he says. “Financial literacy in South Africa is very low and that is why people often fall victim to these schemes.”

He adds: “We have found that even people who are affluent and who understand a little about managing their finances fall victim to these schemes – it is just the temptation of the promised return.”

He warns that Ponzi schemes are an illegal activity, and those who take part in them will be dealt with in terms of the law.