Rassie Erasmus and Jacques Nienaber are essentially inseparable, but that doesn't mean they don't disagree on some coaching matters. 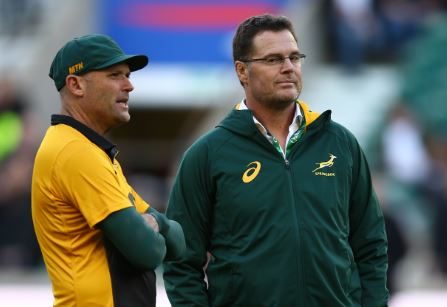 Springbok coach Jacques Nienaber and Director of Rugby, Rassie Erasmus, will be keeping an eye on the local talent from this week. Picture: Getty Images

One of the most impressive aspects of the Springboks at the 2019 Rugby World Cup has been their robust defence, and the man who gets the credit for that is defence coach Jacques Nienaber.

The Boks have conceded just three tries at the tournament and their massive defence was on display once more this past weekend when they beat Japan 26-3 in the quarter-finals despite having been dominated in the possession stats.

Nienaber started his career in rugby as a physiotherapist at Free State all the way back when Erasmus was still playing for the union before moving into strength and conditioning and then defence.

He has spent the majority of his career working alongside Erasmus, from the Stormers to Munster, but on Thursday in Yokohama Nienaber revealed that his relationship with the Bok mentor goes back even further than the start of his rugby career.

“We met a long time ago, when we were in the army together,” Nienaber explained.

“In the army, you get fairly tight.

“Then we went to university together. He was much better in the army than I was. He was a very good tactician, as you can see.

“Then we met up again when I was the physio and he was the captain of the university team.”

Nienaber added that over the years the relationship had endured its fair share of tests.

“We have been friends for a long time, but as we always say, whenever there is a rugby decision that needs to be discussed, sometimes we disagree and we get angry at each other,” he said.

“We’ve got a good relationship in terms of that. We are friends on the one side, but Rassie is my boss.

“We can have a drink together, but when we have to make decisions about rugby, we don’t have egos of accepting the route we want to take.”