We ‘support you’: Black Twitter reacts to AfriForum taking on Meyiwa murder

'An enemy of our enemy is our friend' says a popular pro-EFF account of its decision to back the lobby group in this instance. 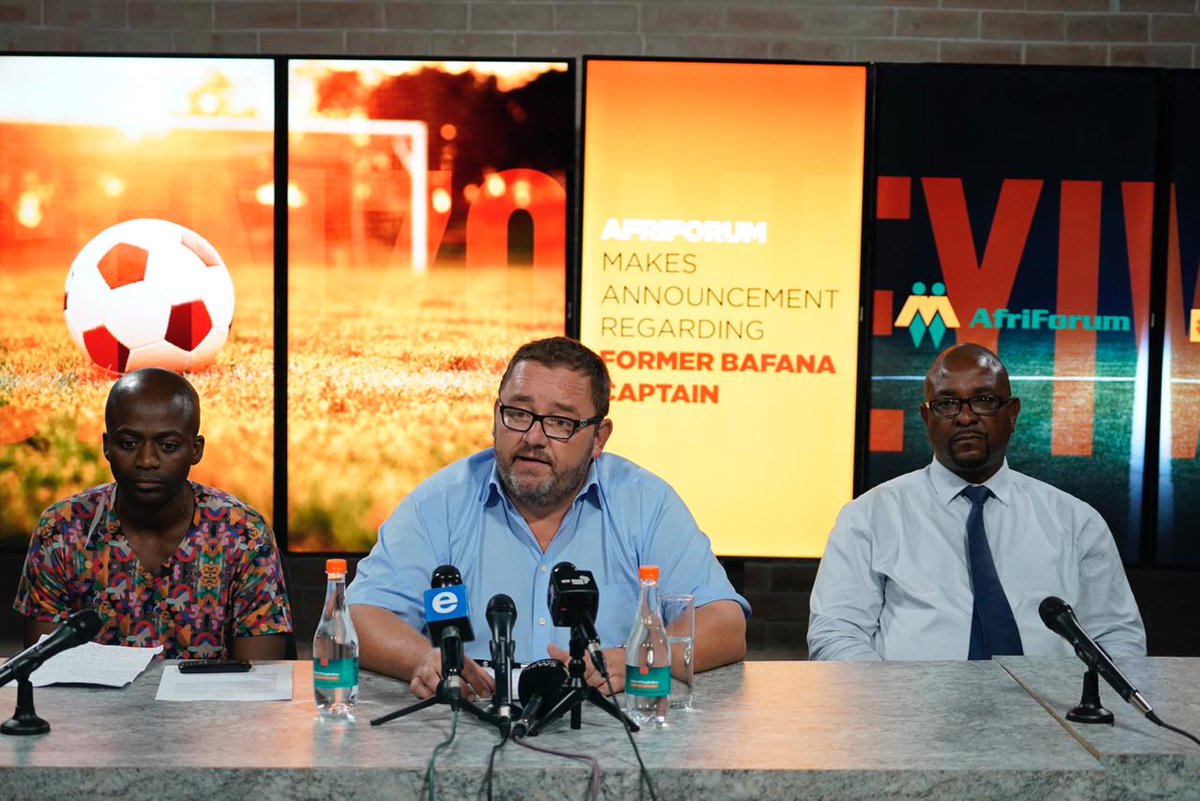 AfriForum CEO Kallie Kriel briefs the media with members of Senzo Meyiwa's family on its decision to represent the family in his murder trial, 5 November 2019. Picture: Twitter (@AfriForum)

Lobby group AfriForum’s decision to represent the family of late Bafana Bafana and Orlando Pirates goalkeeper Senzo Meyiwa in the investigation into his murder has been met with support from many black people on social media.

AfriForum is described on Wikipedia as an “organisation focused on the interests of Afrikaners”.

The lobby group is often harshly slated by black South Africans on social media for incidents such as deputy CEO Ernst Roets’ decision to tweet the apartheid flag hours after “gratuitous display” of it was outlawed and deemed hate speech by Equality court.

Other controversies have included its CEO Kallie Kriel saying: “I don’t think that apartheid was a crime against humanity, but I think it was wrong”, the organisation releasing a documentary that was criticised for including footage of an interviewee defending Hendrik Verwoerd’s policies, and Roets being met with a backlash in parliament for saying it was a “historical fallacy” that white people stole land from black people.

However, the decision to agree to help the Meyiwa family prosecute their son’s alleged killers seems to have been met with support by numerous black people on Twitter.

Parody account @AdvBarryRoux, believed to be run by Zambian-born blogger Csho “Shepard” Chilala, is known for its fervent identification with the Economic Freedom Fighters (EFF). The account expressed “support” for AfriForum on the basis that “an enemy of our enemy is our friend”.

In the past, the account has not shown AfriForum much love, describing it as “a group of Klu Klux Klan (sic) who don’t have a life” as well as “a bunch of lifeless, juvenile, idiotic, useless, stupid, foolish turds with no hope of redemption”.

The account did add a caveat to its tweet about “supporting” AfriForum: “Come here let’s fight for [Senzo Meyiwa] together, when we are done with the incompetence SAPS and NPA, we’re coming for the Land”. This demonstrates that his support for AfriForum likely does not extend beyond this case, as the organisation is strongly opposed to the expropriation of land without compensation.

AfriForum garnered support from other black people on Twitter, ranging from expressions of “love” to the view that the organisation “should inspire all of us to be more focused”.

Several users made the joke that if AfriForum managed to solve the murder, they or other black people may vote for the Freedom Front Plus (FF+). While the party is not officially linked to AfriForum, Kriel is one of a large number of people in the organisation’s leadership who were formerly associated with the party.

Not all users showed AfriForum support, however, with some calling the family’s decision to approach the organisation “embarrassing”, “poor” and one which will make “white supremacy more efficient”.

These views are similar to ones expressed by lawyer and Country Duty founder Tumi Sole on Power FM on Tuesday night. He called the Meyiwa family approaching AfriForum an “indictment and a shame”.

“I hang my head in shame and I think that my colleagues in the [legal] profession should also do the same. We not only failed Senzo Meyiwa’s family but other victims of crime as well. It’s time that we look out for our own,” he said.

If you decide to take up the Senzo Meyiwa case, we will support you because An enemy of our enemy is our friend. Come here let's fight for #SenzoMeyiwa together, when we are done with the incompetence SAPS & NPA, we're coming for the Land.

#JusticeForSenzoMeyiwa The biggest indictment on the NPA and law enforcement is that people generally believe(even if they wont want to admit it) that Afriforum will find some resolution to this matter. People dont have faith anymore in the institutions placed to protect them.

@AldrinSampear, now that @afriforum is involved, see how fast and efficient the police and NPA will become and crack this case.#SenzoMeyiwa #PowerTalk

@AldrinSampear #PowerTalk when @afriforum finally cracks this case and help the Meyiwa Family get Justice for Senzo.. The Entire Orlando Pirates Supporters will definitely vote for the FF+

Am voting ffplus in the next elections if @afriforum crack the #SenzoMeyiwa case, just a thank you vote. @AldrinSampear @Powerfm987

If @afriforum can get this matter of Senzo Meyiwa right, I will consider voting for FFplus in the next election because surely our government don't care about us all they care about is the dirty bloodied money.

If @afriforum will help to get #SenzoMeyiwa's murderers arrested I really support them 100%,it's hard and painful to bury a son while people who saw everything are quite.

AfriForum is the only way now sister… https://t.co/nlpwDwjHlj

@AldrinSampear #SAPS said all persons that were in the house are witnesses. But #Afriforum said they are all Suspects. Thats how you unpack a case. Have more than 5 possibilities

Make no mistake Afriforum are equivalent to ambulance chasers. they saw an opportunity to stick it to government and also to take off some of their racist shine if they justice of Senzo. If they succeed I will be happy that Senzo got justice but it will also be a dark day

Listening to @tumisole on Power FM and I can’t help but concur; the legal system has failed Senzo Meyiwa’s family and it’s sad that they found themselves with no other option but to approach an organization like AfriForum!! It’s embarrassing!! ????

I know Senzo Meyiwa’s family desperately want to solve their sons case, but to approach Afriforum for help ?????

For racist AfriForum this is an enormous ideological victory, a coup. It will doubtless reinforce the racist notion that blacks can't be left to their own modus operandi

How about you / Afriforum prosecutes this violent dangerous thug? If bandwidth or funding is an issue maybe you can drop your investigations surrounding the death of the former Bafana captain? Preventing future violence against your constituents seems more of priority, yes?