The Cape Town group of refugees has said it would like to go to any country that will have them, and has suggested Canada as a possible host. 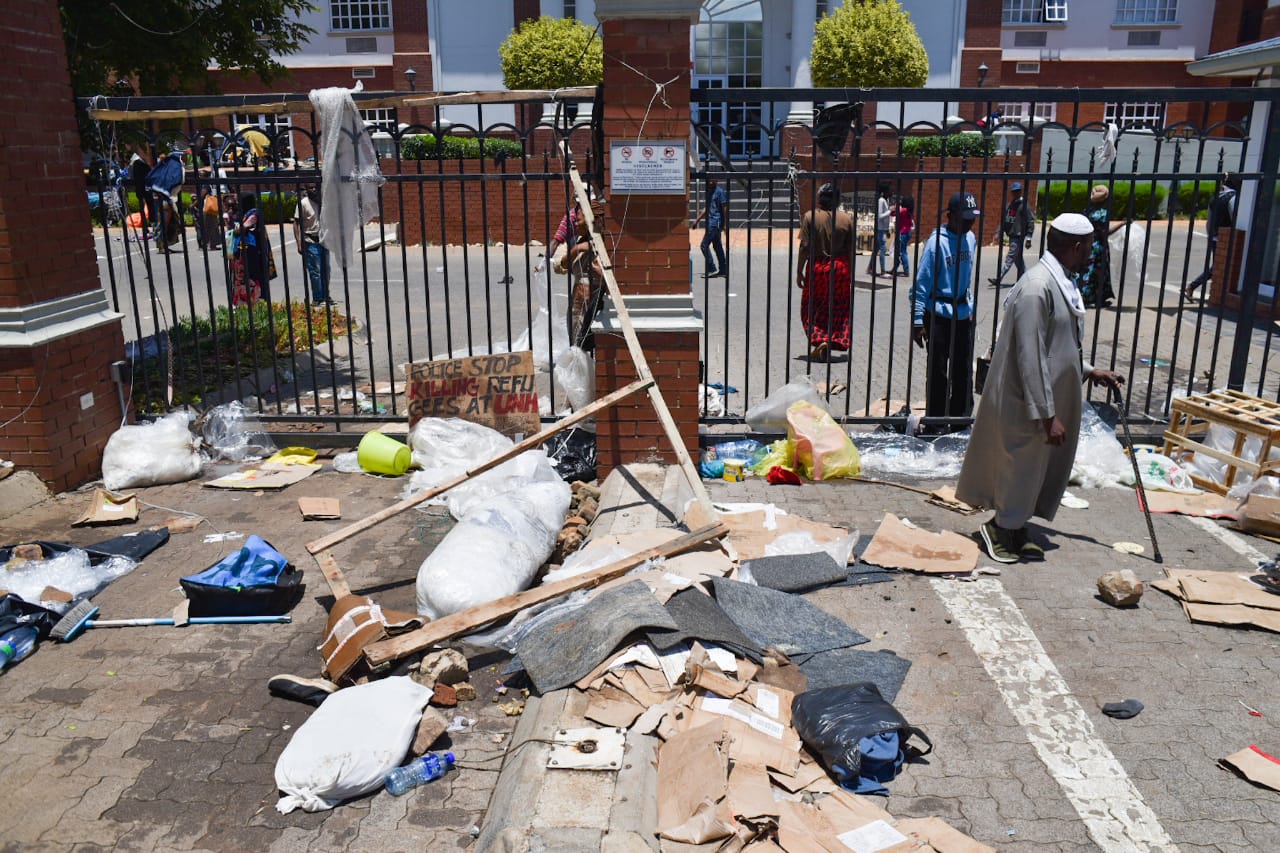 Refugees protest at the UNHCR in Pretoria before their removal by police, 14 November 2019. Picture: Jacques Nelles

This was as tensions rise among two groups of foreign nationals demanding evacuation from South Africa.

“South Africa cannot impose on Canada that there are refugees who want to be moved to Canada,” said Nzuza as a group of foreign nationals holding a sit-in in Pretoria scaled the walls of the United Nations’ refugee agency, the UNHCR.

The incident came after a court order on Wednesday that they move from campsites they set up in Brooklyn and Waterkloof near the UNHCR, within three days. They now face trespassing charges.

In Cape Town, another group of several hundred people was forcibly removed from the Waldorf Arcade in the CBD by police on October 30, and took refuge at the Central Methodist Church.

They have asked to be taken to a country other than their country of origin, saying they are refugees and asylum seekers, and will not be safe if they go back to the country they came from.

They have also alleged that they are targets of violence and xenophobia in South Africa, and that they struggle to get the paperwork required to move on to jobs, or get medical care.

The Cape Town group has said it would like to go to any country that will have them, and has suggested Canada as a possible host.

If they cannot find a host country, they will pack their bags and walk to Namibia or Botswana.

It has already told the Gift of the Givers’ relief agency to stop providing food after one of its directors said their demand is “unrealistic”.

“Unfortunately we cannot impose on another country and say: ‘Please take these people and relocate them’,” said Nzuza.

He was speaking at a conference of experts deliberating how to structure new marriage laws in South Africa, that would take into account the changing nature of partnerships.

The laws would also cover property rights, human dignity, and marriages of people under the age of 18.

He touched on the topic of foreign nationals while discussing problems the department faces in this area, such as “marriages of convenience” for economic reasons, and its handling of refugee and asylum seeker applications.

He said people who abuse refugee and asylum seeker protections are “clogging up the system” at the department.

“They know when a person utters the words ‘I’m seeking asylum’, there is very little you can do,” he said, adding that this is not just a problem in South Africa, but around the world.

He said the department had told the UNHCR that the country’s asylum seeker and refugee regime is being abused by some people.

He does not believe South Africans are xenophobic, saying that attacks on foreign nationals are motivated by crime.

“Those are criminal elements who need to be dealt with harshly because that is not South Africa. South Africa does not believe in attacking foreign nationals.”