Maseko, who has welcomed Pillay's dismissal, reportedly said that most people at the news channel were reluctant to speak out at the risk of losing their jobs. Former eNCA journalist Samkele Maseko has said that there was a "culture of fear" at broadcaster eNCA under the management of its former director of news, Kanthan Pillay. Image: Twitter/@samkelemaseko

Former eNCA journalist Samkele Maseko has said that there was a “culture of fear” at broadcaster eNCA under the management of its former director of news, Kanthan Pillay.

“There was a culture of fear not only amongst the staff but also mid-management and top management as well at eNCA,” Maseko told EWN.

Maseko, who has welcomed Pillay’s dismissal, reportedly said that most people at the news channel were reluctant to speak out at the risk of losing their jobs.

On Friday, eNCA announced it “has parted company with … Pillay with immediate effect”, News24 reported.

Pillay was widely criticised after he referred to political journalist Samkele Maseko’s move from the news channel to rival, SABC News, as “rats swimming toward a sinking ship”. 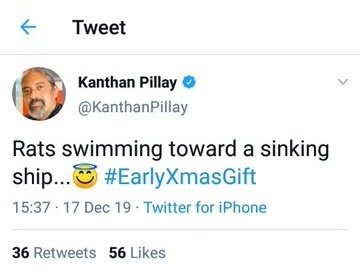 “After intense overnight investigation and consultation, the channel decided it had no alternative but to end its relationship with him. Although he was acting in an individual capacity and his posting was unsolicited, he was nonetheless a senior member of staff and the channel believes there was no room for any other outcome and that damage control was imperative,” read the statement just after 12:30 on Friday.

The news channel said “[s]erious allegations have also been levelled at eNCA about Pillay’s censorship of stories and his management style”.

“The channel takes the allegations of censorship very seriously.”

The South African National Editors’ Forum (Sanef) said on Friday it hoped the dismissal of Pillay, “marks the beginning of eNCA restoring its credibility”.

Pillay, who is the leader of the Capitalist Party that failed to win a seat in this year’s national elections, came under fire when he seemingly referred to eNCA journalist Samkele Maseko as a rat.

In a statement welcoming the dismissal, Sanef said it was “unacceptable” that a leader of a political party could be given an editorial role in a newsroom.

“Sanef calls on eNCA management to get to the bottom of how a politician was ever allowed to have such a senior position in its newsroom,” it said.

Once Pillay was dismissed, Khayelihle Khumalo, who had been suspended by Pillay, was then reinstated, to applause from Sanef.

“Sanef also welcomes the immediate reinstatement of journalist Khayelihle Khumalo who was recently suspended by Pillay.”

eNCA said it would co-operate “fully” with Sanef which requested a meeting with management to seek clarity on Pillay’s appointment.

Editor-in-chief Jeremy Maggs said: “All news organisations have one currency and that is credibility. It is clear this negative attention has adversely affected eNCA’s reputation and credibility. However with the talented and dedicated staff we have, I believe the channel can recover.

“Right now our immediate priorities are to mend strained relationships and to rebuild credibility with its audience and other stakeholders as soon as possible.”