As news of Covid-19 fills our lives, the newly discovered Comet SWAN is currently gliding across our skies. 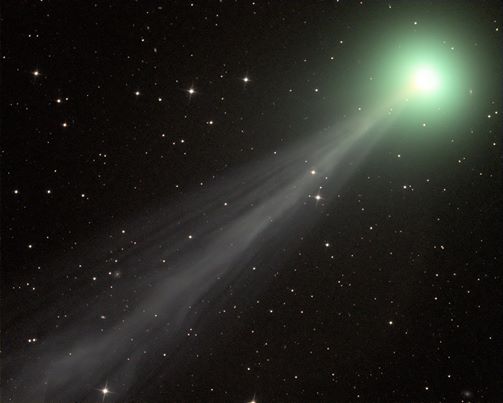 Local astronomer Heine Wieben Rasmussen has captured a series of spectacular images of Comet SWAN from the remote mountains of the Cederberg in the Western Cape, where he owns Bliss & Stars, a mindfulness and astronomy retreat.

Comets are cosmic snowballs of frozen gases, rock and dust that orbit the sun – they leave streaking tails of debris behind them as they travel across the sky.

The Greeks and Romans and many other ancient cultures believed that the appearance of comets was a sign of significant earthly events to come.

The C/2020 F8 (SWAN) or Comet SWAN, is a comet that was discovered by Australian amateur astronomer Michael Mattiazzo in images taken by the SWAN camera on 25 March aboard the Solar Heliospheric Observer spacecraft.

It is to be found 100 million kilometres from Earth in the constellation of Cetus and is less than 50 degrees from the sun.

Barely visible in the Southern Hemisphere, the comet is barely visible to the naked eye from a dark site, but the glare of twilight, zodiacal light, atmospheric extinction and a nearly full moon will probably overpower naked eye observations.

It is best seen from the Southern Hemisphere as you currently need to be south of 30° N to see it.

According to UK publication Daily Express, Comet SWAN will continue to make its way closer to Earth.

On 12 May, it will reportedly be at its closest, being just 0.56 astronomical units from Earth – roughly half the distance between the sun and our planet.

Rasmussen said the reason he was able to obtain the photographs was the darkness of the sky.

“I am very fortunate to live in the Cederberg in a dark sky area, where there is very little light pollution. Increasing urbanisation has kept skies in the towns and cities artificially light, so few people have experienced the magic of the Milky Way crossing a star studded sky.

“We have lost our connection with nature on so many levels. It is time to pause and reconnect – looking up at the stars is a wonderful way to regain perspective.”

Rasmussen said he had a short window period to photograph the comet.

“As it approaches the sun, it boils and therefore appears brighter.

“But the full moon is visible now and at daybreak, you have the light of dawn at the same time, so if I were to photograph it [on Friday] night, the sky would be too bright because of the moon.”

Rasmussen’s timing when taking the picture was consequently spot-on.

Climate change: Removing CO2 from the air no longer optional
6 days ago
6 days ago

Climate change: Removing CO2 from the air no longer optional
6 days ago
6 days ago