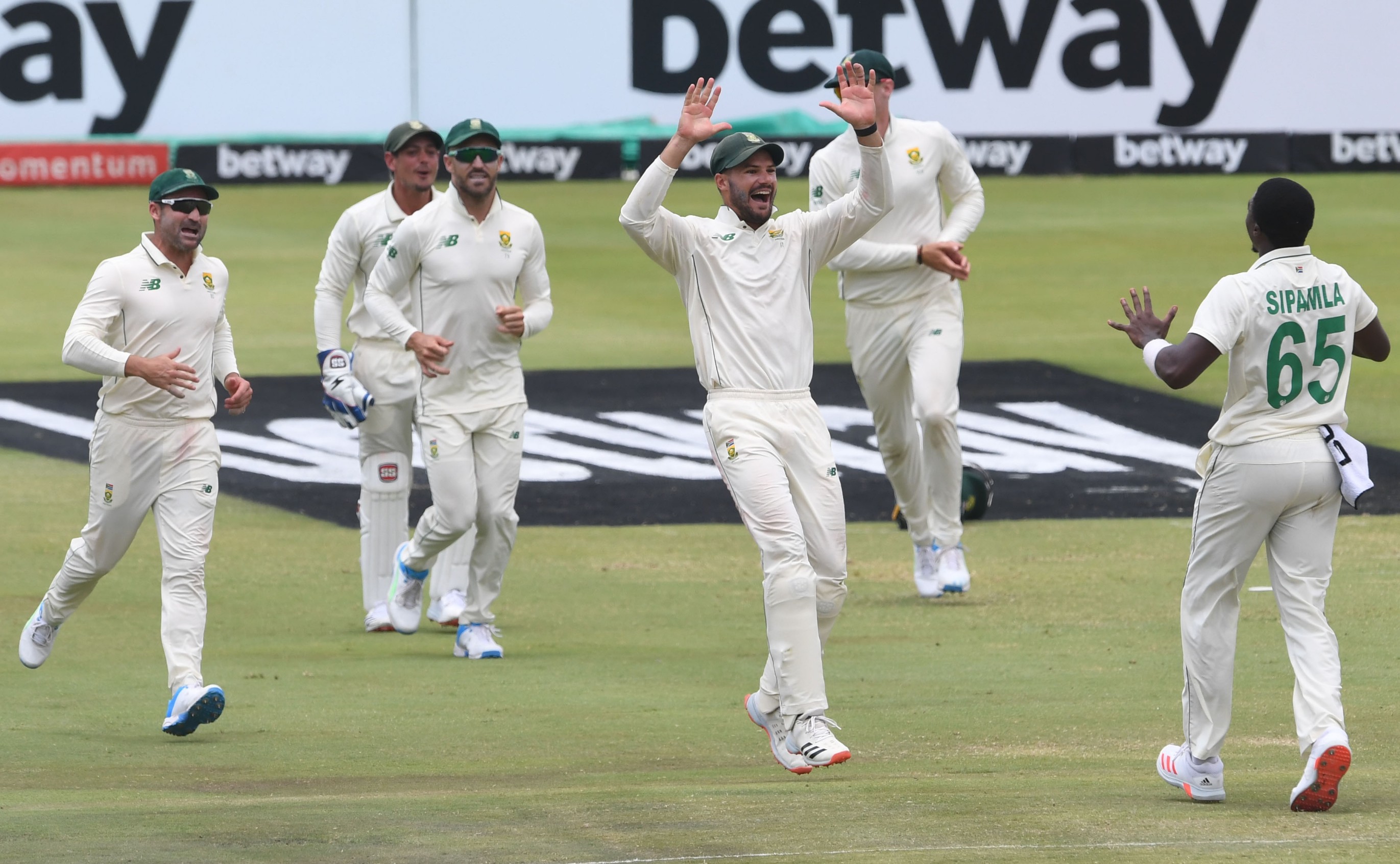 Lutho Sipamla celebrates a wicket on the fourth day of the first Test between South Africa and Sri Lanka. Picture: Gallo Images

South Africa had a 1-0 series lead safely tucked away in their property as they completed an innings-and-45-runs victory over Sri Lanka half-an-hour after lunch on the fourth day of the first Test at SuperSport Park in Centurion on Tuesday.

With this being just a two-match series, it means the Proteas are assured of not losing their fourth successive Test series.

The injury-decimated Sri Lankans were eventually put out of their misery on 180 with Dhananjaya de Silva the only batsman who eventually did not come to the crease.

The Proteas began the post-lunch session with two spinners in an attempt to lift their lagging over-rate, but once Sipamla returned, he had Wanindu Hasaranga caught as the plucky debutant tried to drive him down the ground. Hasaranga had belted 59 off just 53 balls, with 12 fours and a six.

Nortje then induced a catch in the gully from Kasun Rajitha (0) and South Africa will go into the second Test at the Wanderers with much to build on.

South Africa put themselves on the verge of victory in the morning session as they were able to tear through the visitors’ batting line-up, taking five wickets as Sri Lanka limped to lunch on 148 for seven, still trailing by 77 runs.

While Lungi Ngidi had been the wicket-taker on the third evening as Sri Lanka went to 65 for two overnight, it was seamer Wiaan Mulder who did most of the damage on the fourth morning with a fine spell of nine overs, two for 29.

He made the first breakthrough of the day when he jagged a delivery back through Dinesh Chandimal’s gate, hitting the top of off stump and bowling him for 25. Mulder bowled particularly well to the left-handers and then had Niroshan Dickwella caught behind for 10, using the natural angle from over the wicket to good effect.

Opener Kusal Perera was still there, however, and landed some tremendous blows as he belted 64 off 87 balls, taking on the Proteas pacemen with the same belligerent attitude as in his famous matchwinning innings in Durban in 2019.

It was Nortje who removed the dangerman, however, winning a caught-behind decision against the left-hander with umpire Adrian Holdstock’s not out decision being overturned on review as a thin edge was picked up on UltraEdge.

Sipamla, who has just been getting better and better after a tough first day at the office, then produced a superb delivery to dismiss first-innings fifty-maker Dasun Shanaka for just 6. The fast bowler angled a nice and full delivery into the right-hander and it then nipped away, finding the edge as the batsman went on a big flatfooted drive, wicketkeeper Quinton de Kock pouncing on the catch.

A chaotic run out, Vishwa Fernando (0) showing poor awareness of the situation as he went for a quick single with the injured Hasaranga, then completed another poor session for the Sri Lankans.