What if Oscar is found guilty of culpable homicide?

Judge Thokozile Masipa can impose anything from a prison sentence to a warning if she finds paralympian Oscar Pistorius guilty of culpable homicide when court resumes on Friday.

Advocate Piet Pistorius (no relation), an experienced criminal defender who has followed the trial closely, explained that culpable homicide is a “competent verdict” for a charge of murder if the court rejects the state’s version and finds Pistorius did not have the intention to murder, but was grossly negligent.

The Judge ruled on Thursday that the state had not proved that Pistorius was guilty of murder in any form – either premeditated murder or of murder with indirect intent.

Judge Masipa ruled his conduct was negligent and that a reasonable person in the same circumstances, with the same disability as Pistorius, would have foreseen the possibility that someone could be killed and would have taken reasonable steps to prevent such an occurrence.

She said as a fight rather than flight type of personality Pistorius would not have been expected to run from danger, but there were many other means he could have used to deal with the danger.

“The accused knew there was a person behind toilet door. He chose to use a firearm, a lethal weapon. He was competent in use of firearms as he had undergone some training,” she said. 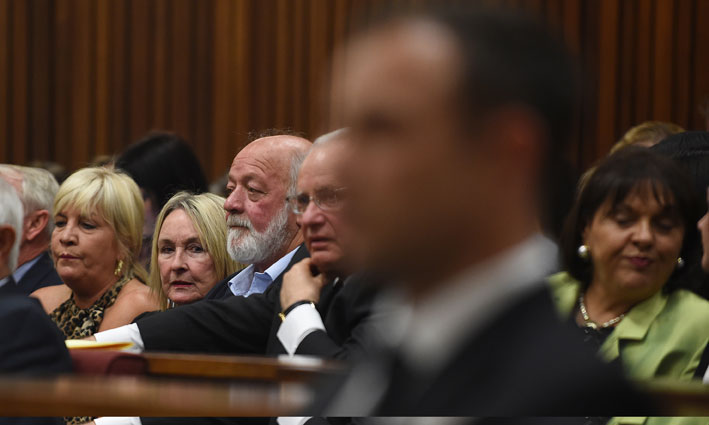 Oscar Pistorius is seen in the dock (foreground) while parents of Reeva Steenkamp, June and Barry look on during judgment in the paralympian’s murder trial at the High Court in Pretoria on Thursday, 11 September 2014. Picture: Phill Magakoe/Independent Newspapers/ Pool

What if he is found guilty?

A judge can in such a case impose anything from a warning to a prison sentence.

Even if he is acquitted, Pistorius could still faces imprisonment if he is convicted on two charges of discharging a firearm in a public place – each of which carries a minimum sentence of five years’ imprisonment.

He also faces a charge of the illegal possession of .38 ammunition, which the advocate said has no minimum sentence.