On Monday, New Delhi TV (NDTV) and RT reported that the All-India Institute of Medical Sciences (AIIMS) announced the grim discovery on Sunday, warning that the strains were found across India. 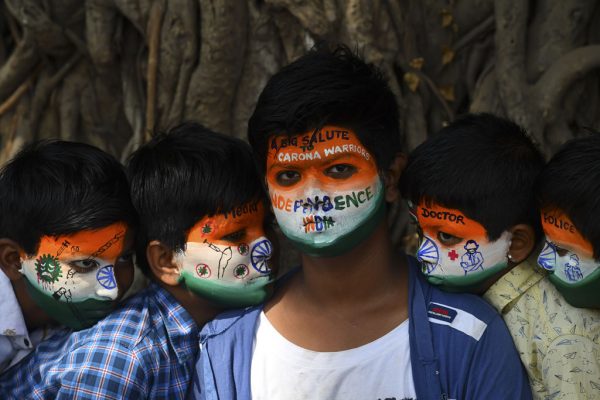 Students pose for pictures after getting their face painted to pay tribute to frontline workers fighting against the spread of the Covid-19 coronavirus, ahead of the upcoming India's Republic Day celebrations, in Mumbai on January 24, 2021. (Photo by INDRANIL MUKHERJEE / AFP)

India has just discovered 240 new mutations of the coronavirus which causes Covid-19, according to at least two overseas publications.

This follows the prevalence of new variants which were the driving forces behind second and third waves of infection in the UK, South Africa and Brazil.

On Monday, New Delhi TV (NDTV) and RT reported that the All-India Institute of Medical Sciences (AIIMS) announced the grim discovery on Sunday, warning that the variants were found across India. Indian health officials warned that some of these variants were potentially more infectious and could even be capable of evading immune responses altogether.

This comes on the backdrop of the World Health Organisation listing two versions of the AstraZeneca/Oxford COVID-19 vaccine for emergency use, giving the green light for these vaccines to be rolled out globally through COVAX. The vaccines are produced by AstraZeneca-SKBio (Republic of Korea) and the Serum Institute of India.

The new Covid-19 variants are likely behind the sudden spike of new cases in several Indian states, including Maharashtra – the second most populous state housing the city of Mumbai – a member of the regional Covid-19 task force, Shahshank Joshi, told NDTV.

Head of the All-India Institute of Medical Sciences (AIIMS) Randeep Guleria also reportedly warned that some of the new variants could be highly transmissible or potentially more dangerous as they presented an “escape mechanism” which could cause re-infection, he told the Indian broadcaster.

Several districts in the country were about to enter into stricter lockdown conditions from Monday according to NDTV, including Maharashtra where 6,971 new cases and 35 Covid-related deaths were reported in the district on Sunday.