‘We’re not safe’: Coka family fears for their lives after murder accused get bail

Before the magistrate was done handing down his judgment on Friday, the Coka family walked out of court with their heads down. 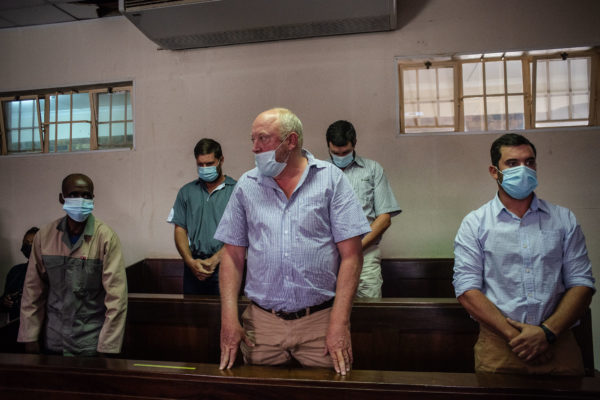 The five accused in the Piet Retief Magistrate’s Court, in Mkhondo, during their bail hearing on 19 April 2021, in the case where the Coka brothers were killed. Picture: Jacques Nelles

The family of Mgcini and Zenzele Coka says they will be sleeping with one eye open after the five men charged with the brothers’ murder were each released on R10,000 bail on Friday.

Orchard Klingenberg, Danie Malan, Cornelius Greyling, Ignitius Steinberg and Senzele Yende were granted bail after the Piet Retief Magistrate’s Court ruled there was no evidence the men would interfere with or intimidate witnesses as was argued by the State during their bail application.

The brothers’ nephew, Sandile Coka, said they were unhappy about bail “because we are not safe”.

“If you are black, you are like a dog. They will come to our homes at night to attack us and get rid of the evidence,” he claimed.

Before magistrate Simon Fankomo was done handing down his judgment, the Coka family walked out of court with their heads down.

Sandile feared they would come to harm.

“And when we get home, we must pack our belongings and go to the police station and stay there. They must arrest us because they failed to arrest the white people, and they got bail.”

The men were arrested after the Coka brothers were shot and killed on 9 April 2021 at Pampoenkraal farm during an altercation between residents and farmers relating to jobs.

During the lengthy bail application, the State argued the men had all acted in a common purpose and should all be held responsible for the deaths. However, this was disputed by the defence, who instead argued it was the attack on other farmers that triggered their reaction and it was not premeditated.

In his judgment, Fankomo said there were no basis to find common purpose was applicable at present, therefore the offences should fall under schedule five of the Criminal Procedure Act and not schedule six.

READ NEXT: ‘You died for your land’- murdered Coka brothers laid to rest