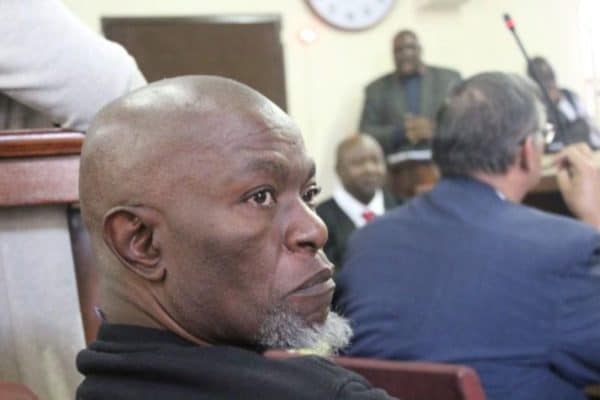 Sydney Mabuza was out on R200,000 bail. Picture: CNS/Lowvelder

Authorities in Mpumalanga have confirmed the alleged rhino poaching kingpin, Sydney Petros Mabuza, 57, was gunned down in Hazyview on Thursday.

Mabuza – also known as “Mr Big” – succumbed to his injuries while being taken to the Kiaat Hospital in Mbombela.

Footage shared on social media shows his vehicle, a Ford Ranger, riddled with bullet holes. In another video, a black vehicle can be seen driving away after the shooting.

It’s been widely reported that Mabuza was out on R200,000 bail for charges brought against him in 2019.

Mabuza and other suspects in the case faced murder charges for an alleged hit on an individual who owed him money.

According to Brigadier Leonard Hlathi, Mabuza “was shot in broad daylight in Hazyview in front of people and we believe people have seen and know the wanted suspects”.

Hlathi says Mabuza “was sitting in his Ford Ranger double-cab next to a shopping complex when a group of about three armed suspects, who were driving a black VW Polo, fired several shots at him and fled the scene”.

An elderly woman was also caught in the crossfire. Hlathi confirmed the passerby “was shot in her lower body and is recuperating in hospital”.

“We call on the public to contact the police anonymously.”

No arrests have been made as yet and the motive for the killing is unknown. Hlathi did not say whether Mabuza’s killing was gang-related.

He said, however, the task team would continue with the inquiry as the deceased was connected to other cases under investigation. Acting provincial police commissioner Maj-Gen Thulani Phahla condemned the killing.

“No one has a right to take another person’s life regardless of the reasons. We are optimistic that members of the community will share information with the police so the perpetrators can be brought to book.”

Members of the public with information on the case can contact their nearest police station or the police hotline on 0800 010 111.