The delegation departed on Sunday but will return to conduct 'further comprehensive engagements'. 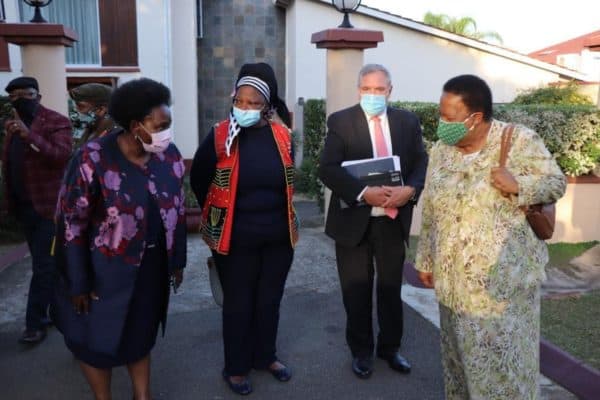 The delegation was invited on a “a fact-finding mission” and met with church groups, the Law Society, and trade unions, as well as the Human Rights Commission.

The delegation was welcomed by acting Prime Minister Themba Masuku, however, a meeting with King Mswati III wasn’t confirmed.

Kwape said the SADC “stands ready to support the people of the Kingdom of eSwatini in their quest to bring peace and calm that will lead to the socio-economic development of this country”.

“The mission is leaving the Kingdom and will be returning to conduct further comprehensive engagements”, a government representative said over the weekend.

Prior to the delegation’s visit to eSwatini, Masisi called on individuals and organisations “to desist from acts of violence”, and urged security services “to exercise restraint in their response to restore order and normalcy”.

“SADC also urges all stakeholders to channel their grievances through the established national structures, and the authorities to have an open national dialogue, in order to continue upholding the legacy of peace and stability that has characterised the people of the Kingdom of eSwatini, and the region at large,” Masisi wrote.

On Saturday, human rights organisation Amnesty International confirmed at least 20 protesters have been killed while six others are not yet accounted for.

A further 150 demonstrators have been hospitalised, with reports indicating police used live ammunition to disperse incensed crowds. Some of the dead have not yet been identified.

Secretary-general of the People’s United Democratic Movement, Wandile Dludlu, said more than 60 unarmed residents and protesters had been killed, and more than 200 wounded, as reported by AFP.

After African mediation, Eswatini king calls for calm
2 days ago
2 days ago
PREMIUM!

SA, SADC silence questioned as situation deteriorates in Eswatini
4 days ago
4 days ago

After African mediation, Eswatini king calls for calm
2 days ago
2 days ago
PREMIUM!

SA, SADC silence questioned as situation deteriorates in Eswatini
4 days ago
4 days ago