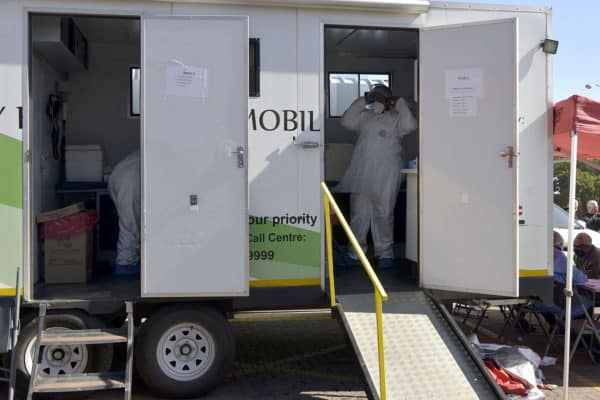 People queue at a mobile testing center in Dorandia, Pretoria, 5 July 2021. The center was made available for people that feel symptoms or had been in contact with positive people. Picture: Neil McCartney

The province may be at the peak of its third wave, with other provinces yet to hit their maximum numbers.

“From the peak of the infections to where it drops, it is usually in the order of about a month,” Moultrie said.

“Infections are increasing rapidly in Gauteng and the Western Cape. The other provinces are also showing strong signs of an increase in infections.”

He added the one exception was the Northern Cape, which peaked a couple of weeks ago.

It reported only 317 cases yesterday.

About rumours of a new, deadlier Covid strain, Moultrie said there was no hard evidence of the highly infectious lambda variant in South Africa yet.

“The current infections are clearly being driven by the delta variant, which is behind the rapid increase of infections in Gauteng and the Western Cape in recent weeks,” Moultrie said.

As part of its weekly programme, the National Coronavirus Command Council (NCCC) met yesterday to receive updates on the management of the third wave of Covid in South Africa.

The NCCC noted that more provinces were officially in the throes of the third wave.

Acting Minister in the Presidency Khumbudzo Ntshavheni said: “From NCCC discussions, every effort to scale up vaccination of the population will be crucial.”

According to the South African Covid-19 Modelling Consortium, data captured indicated Covid-related hospitalisations and admissions in Gauteng at the beginning of July surpassed the peak of the second wave during December 2020 and January 2021.

Professor Tulio de Oliveira, director of the KwaZulu-Natal Research Innovation and Sequencing Platform, delivered a presentation to the NCCC this week about the latest update on delta and other variants.

“We have not detected the lambda variant in SA. We can also confirm that the delta variant is widespread in many provinces and we are increasing genomic surveillance,” Oliveira tweeted.

NICD spokesperson Sinenhlanhla Jimoh said a reproductive number report would be released tomorrow about the third wave peak and when the infection rate was expected to drop.

Professor Ian Sanne from the infectious diseases department at Wits University urged the public to get tested sooner rather than later and said early detection and treatment could “help change the course of this disease”.

“Seek help from the clinics or doctors if you develop shortness of breath, continuous fever or severe weakness.”

Sanne encouraged South Africans to stay focused and to limit social engagement, avoid gatherings and keep those masks on.

“And wash hands regularly,” he said.