Police are monitoring the N3. 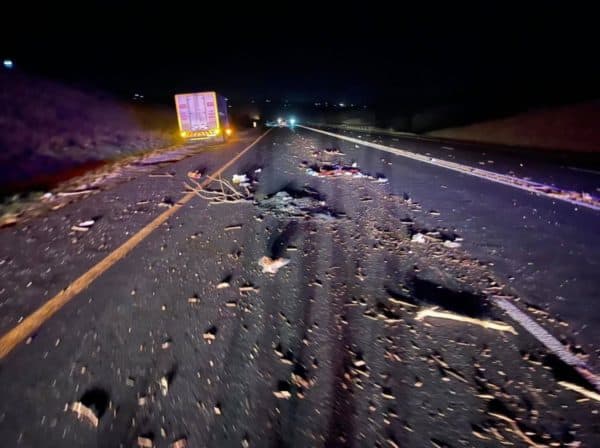 Part of the N3 near Mooi Plaza has been reopened after the removal of several trucks torched during the KZN shutdown protests.

The N3 Toll Concession (N3TC) said the highway’s southbound lanes had been reopened on Saturday evening.

It added: “Clean-up and recovery operations are continuing in the vicinity of Mooi Plaza. The southbound lanes have just been reopened to traffic. Extensive backlogs and delays should continue to be expected.”

N3 cleaned up after protest

Clean-up crews and law enforcement spent most of Saturday removing debris from the road, where an estimated 20 trucks were set on fire on Friday evening.

N3TC spokesperson Anita Heyl said authorities discovered the extent of the damage in the morning.

“All this was done under cover of darkness. I am waiting for a full report, but more than 20 trucks were torched, some are still burning, and it is still too hot to get close.

“The burned trucks include one tanker, which was fortunately not carrying fuel … it was carrying some form of chemical. Fortunately, no one was injured,” she added on Saturday afternoon.

The torching of the trucks and unrest in several parts of the province are believed to be linked to pro-Jacob Zuma protests over his incarceration.

N3TC warned motorists to stay clear of the N3 toll route near Tweedie in Sand River between Tugela Plaza, Bergville and Van Reenen’s Pass as it had received reports of looting and tyres burning.

However, KZN police spokesperson Brigadier Jay Naicker said the reports were incorrect and the police were monitoring the N3.

One year on, and still no justice for murdered KZN environmental activist
10 hours ago
10 hours ago

One year on, and still no justice for murdered KZN environmental activist
10 hours ago
10 hours ago