Minister of Defence and Military Veterans Thandi Modise was among the officials who formally handed the body to the family at the military procession ceremony. 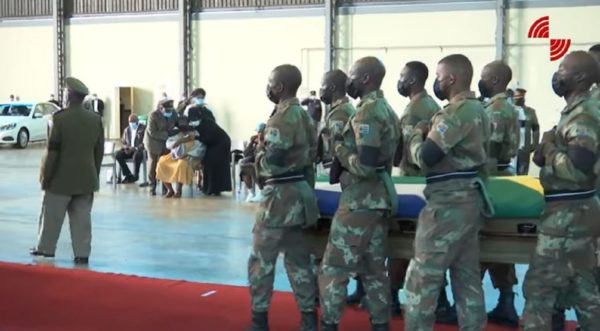 The body of Corporal Tebogo Edwin Radebe who died after an attack by insurgents in Mozambique this week, was handed over to his family yesterday at the Waterkloof Air Force Base, Pretoria.

Radebe was part of Operation Vikela when the soldiers came under attack from insurgents during an ambush east of Chai village on Monday.

Minister of Defence and Military Veterans Thandi Modise was among the officials who formally handed the body to the family at the military procession ceremony.

According to a statement, Radebe, from Paul Roux in the Free State, was born on 6 June 1990 and served as a member of SANDF in Limpopo. He is survived by his aunt, three siblings and two daughters. He was unmarried.

The extraordinary SADC summit of heads of state and government approved the deployment of SADC mission on 15 July as a regional response to help Mozambique combat terrorism and acts of violent extremism.

The country has been plagued by continued acts of terrorism perpetrated on civilians, women and children in some districts of Cabo Delgado.

Modise and her office have again extended their condolences to the family, colleagues and friends of the deceased.

Funeral arrangements will be announced in due course.