About 60 firefighters are at the scene trying to bring the blaze under control, along with fire safety officials. The National Council of Provinces (NCOP) building and the Old Assembly Chamber appear to be at risk.

However, a structural collapse at the Old Assembly Chamber occurring around midday meant the fire had spread to the National Assembly.

Scroll down for live updates.

De Lille reiterated it was the Old Assembly building that caught fire, not the National Assembly building. Firefighters had the blaze “mostly under control”, she added. The situation has since escalated, with many more buildings affected.

Fire and rescue services could only confirm that the teams were dispatched to Parliament, where the roof was already on fire.

While the cause of the fire is still unknown at this stage, reports seem to indicate it began in the office space and is spreading towards the gymnasium.

Parliament’s Presiding Officers confirmed in a statement released on Sunday morning the fire affected both the Old Assembly Wing and the National Assembly Wing of the buildings of Parliament.

These sections house the National Assembly and National Council of Provinces chambers.

The fire was contained in the old wing, while firefighters worked to control the fire in the new wing.

Deputy minister of state security Zizi Kodwa, the South African Police Service and Parliament security personnel are currently in the Parliamentary Precinct to assess the situation.

Firefighters at the scene

As per reports, a building on Parliament Avenue had caught fire. He said Roeland Street, Sea Point, Salt River, Brooklyn, Goodwood, and Milnerton crews were dispatched to the scene.

In his latest media briefing just before midday, Smith said around 60 firefighters with specialised equipment including lift platforms were at the scene. The fire department has also called for additional resources to assist.

There are also two fire safety officials at the scene who are “subject matter experts”, to provide more detail and insight into what went wrong on Sunday morning.

He confirmed the fire was not yet under control.

Smith added that due to multiple incidents of a similar nature occurring, a review on the fire safety system needed to be instituted.

A report on the cause of the fire is expected within the next 48 hours. 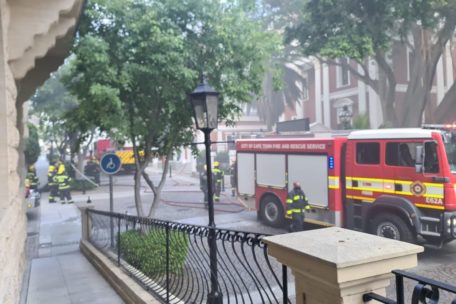 1/12
Firefighters at the scene. Photo: Twitter/@brettherron 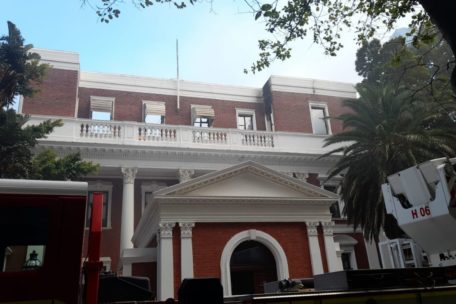 3/12
Several buildings in the Parliamentary precinct were at risk. Photo: Supplied 5/12
EMS and fire services look on as smoke pours out of the Parliamentary building. Photo: Supplied 6/12
The fire continues to burn, spreading from the Old Assembly to the National Assembly. Photo: Parliament Communications 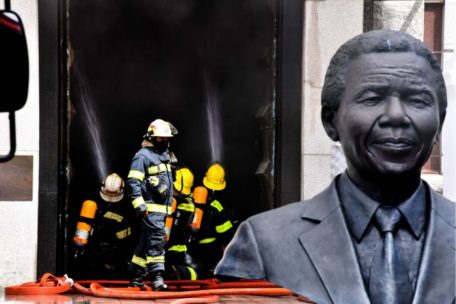 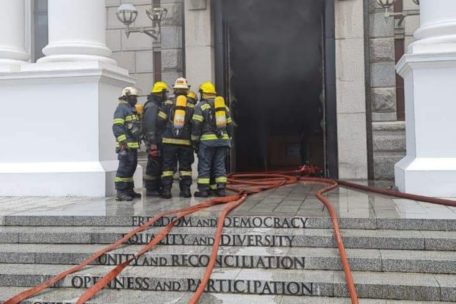 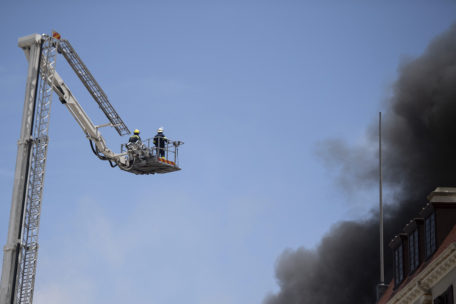 10/12
Firefighters try to extinguish the blaze near the roof of the National Assembly building in the Parliamentary complex in Cape Town on 2 January 2022. Photo: RODGER BOSCH / AFP 11/12
Firefighters walk out of the area, as a fire takes hold of the South African Parliament buildings, in Cape Town on January 2, 2022. (Photo by RODGER BOSCH / AFP) 12/12
A general view of a building on fire at the South African Parliament precinct in Cape Town on 2 January 2022. Photo: Obed Zilwa / AFP

The Houses of Parliament in Cape Town consist of three sections, including the original and oldest building that was completed in 1884.

The newer additions, constructed in the 1920s and 1980s, house the National Assembly.

In April last year, a fire ravaged part of The University of Cape Town’s library housing a unique collection of African archives.