R25 for petrol? Experts warn fuel price could surge even higher this year

The South African Petroleum Industry Association says there is very little government can do to cushion the blow. 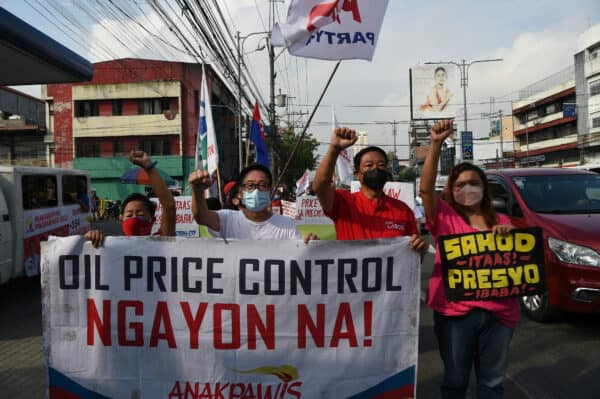 Protesters holding placards stage a rally in front of a petrol station in Manila City on 15 March 2022. Photo: AFP/Ted Aljibe

South Africans are being warned to brace themselves as this week’s astronomically fuel price hike won’t be the last for this year.

The price of petrol is expected to move past the R25 per litre mark towards the end of the year.

While precise projections are not possible at this stage, chief economist at Puma Energy, Saad Rahim, warned that global consumption is not as high as in previous years.

Russian oil production has also fallen sharply since April, with the monthly average heading to 10 million barrels a day (from 11.5 million barrels) – its lowest since September 2020.

Even worse: there isn’t much government can do to cushion the blow.

“Government has to increase (or decrease) the price in line with the Basic Fuel Price (BFP) working rules. If the government does not increase the price, then the whole economic edifice will come tumbling down,” explained South African Petroleum Industry Association‘s (Sapia) head of strategic projects and economic regulations Kevin Baart.

“Companies will be reluctant to import, stockouts will ensue and economic activity will grind to a halt,” Baart added.

The Democratic Alliance is pressuring the government to scrap its fuel levies as a way of protecting consumers, but Baart said this was impractical.

“Slashing the fuel tax and levies would leave a R120 billion – or 10% hole in the country’s fiscus, and how are you going to plug that?” asks Baart.

South Africans consume between 15 to 20% (including petrol, diesel and paraffin) of Sasol’s locally produced petrol via coal.

Increased global demand is cited for the fuel price hike.

The only way to combat the rising fuel costs is to cut demand, but Rahim says there hasn’t been any behaviour change from people to reduce the demand.

Meanwhile, South Africans are now on tenterhooks to hear an impending announcement from Finance Minister Enoch Godongwana on measures to alleviate the burden at the pumps.

But it’s unlikely those measures will yield significant relief, slashing a few cents off the levies won’t translate to much relief at the end of the day.

Government has also indicated that the previous R1.50 reprieve would be reinstated this month.