Tonight's supermoon is the second of four consecutive supermoons this year. 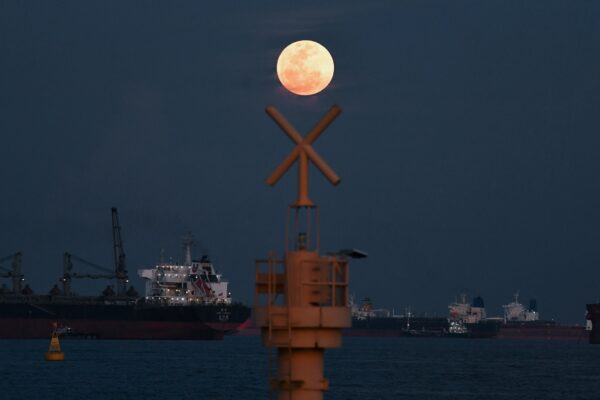 The full moon rises as the June 2022 'Strawberry Supermoon' in Singapore on 14 June 2022. Photo: AFP/Roslan Rahman

According to NASA, June’s Strawberry Supermoon will be so close skygazers will be able to see lunar craters and mountains using a good telescope.

Technically, the moon reached the closest point in its orbit around Earth at 1:52 pm today. However, those of us in the southern hemisphere will still be able to view it in all its glory tonight.

According to NASA, it’s the second of four consecutive moons this year and will be the lowest full moon of 2022.

“With the Moon appearing full from Sunday night through Wednesday morning, [it] will be the lowest full moon of the year, reaching only 23.3 degrees above the horizon Wednesday morning [at 7:56AM in South Africa],” NASA said.

If possible, stay away from bright lights to improve maximum visibility.

What is a Supermoon?

Tonight’s Strawberry Moon is also a supermoon. This happens when a full moon coincides with a perigee – the point in the Moon’s orbit at which it is nearest to Earth.

Due to its orbit around Earth, it will also be significantly brighter and more prominent on 14 June. It’s pedigree is currently 357,432 km from our planet.

The Moon will also shine brighter thanks to its angular diameter – it’s about 7% greater than that of an average-sized moon, and 14% greater than the diameter of a micromoon, also known as an apogee.

Each month’s full moon has its own moniker. In most cases, these names refer to a variety times and places significant among Native American tribes.

To the Algonquin, Ojibwe, Dakota and Lakota communities, June’s lunar event was a sign that strawberries and other fruits were ripe and ready for harvest.

In addition, the Haida people refer to June’s full moon as the ‘Berries Ripen Moon‘. Other names for this month include Blooming Moon (Anishinaabe), Green Corn Moon (Cherokee) and Hoer Moon (Western Abenaki).

It also corresponds with Vat Purnima, the Hindu festival where married women trie a ceremonial thread around a banyan tree to pray for their spouse’s long and prosperous life.