Bathandwa Zuzo, 48, was hit hard by Covid-19, but has lived to tell the tale. 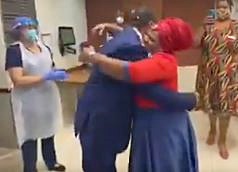 Bathandwa Zuzo, 48, greets his wife after recovering from Covid-19, Cape Town, 18 May 2020. Screengrab from Twitter video.

It was sealed with a kiss from his wife – the story of a Covid-19 survivor, who walked out of hospital a healthy man.

Bathandwa Zuzo was hit hard by Covid-19, but has lived to tell the tale. On Monday, he walked out of Melomed private hospital in Gatesville, Cape Town.

It was on April 26, one month into the lockdown, that he fell ill. He tested positive for the coronavirus and was admitted to hospital.

The Covid-19 survivor’s wife, a nurse – who did not give her name – last saw him on that day in April.

“The doctors told me my husband was very, very sick, and I must be strong.”

As he emerged from the hospital’s warren of wards on Monday, she welcomed him with a kiss.

In the three weeks since he was admitted, Zuzo experienced the worst the illness can throw at a person, explained Western Cape Health Minister Nomafrench Mbombo.

Zuzo has zero recollection of much of his time in the intensive care unit.

For much of his time, “everything was black”, Mbombo said.

Mbombo told News24: “He ended up in ICU and being [on a] ventilator. There is a notion that once you put people on a ventilator, (people) don’t survive. Or you don’t hear about those who have been on ventilators. So today we are showcasing the strength of the health system, plus the skills that the doctors have – especially the physicians in ICU.

“So while we are seeing an increase in numbers, and deaths, 90% of people are treated outside hospital. Only about 2% of people end up in ICU.

“Here, today, we have someone who has managed to beat all odds.”

Mbombo said the provincial government’s analysis showed the Western Cape’s death rate was approximately 1.6% – which was no higher than the national average.

They now expected the Western Cape to reach its “peak” by around June – somewhat earlier than the August-September estimation for South Africa as a whole.