As of Sunday, South Africa has recorded a total of 814,565 positive cases of Covid-19, with 4,116 new cases identified since the last report, Health Minister Zweli Mkhize has announced.

“We extend our condolences to the loved ones of the departed and thank the healthcare workers that treated the deceased patients,” said Mkhize. 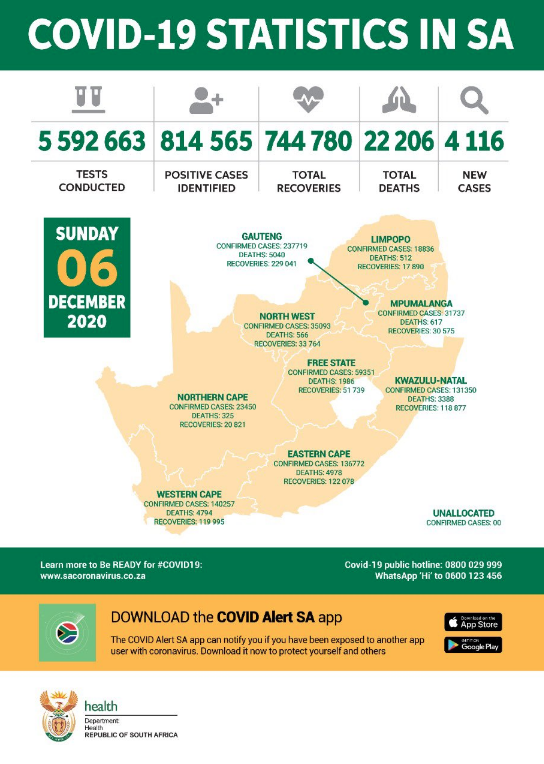 The death toll from Covid-19 has passed the 60,000 mark in Italy, according to an official toll published Sunday.

Restrictive measures aimed at stemming the spread of the virus were nonetheless eased in several regions as the rate of infections stabilised and pressure eased on hospitals.

Italy, the first European country to be hit by the global pandemic, has recorded 60,078 deaths from 1,728,878 infections, the health ministry reported.

Despite steps the government has taken to curb the latest outbreak and care for the sick, hundreds of people are still dying daily.

Italy saw a record 993 deaths on Thursday, the highest toll since the outbreak began in the first months of the year.

It is among the countries with the highest numbers of deaths compared to its population with 98 fatalities per 100,000 inhabitants.

Its mortality rate, or the ratio of deaths to infections, stands at 3.47 percent. Only Britain has a higher rate in Europe with 3.55 percent.

Italian Health Minister Roberto Speranza warned that “if we drop our guard, we run the risk of finding ourselves in January and February facing a new (infection) surge.

“And that we cannot allow,” he told SkyTG24 television.

But the government’s colour-coded system of risk rating showed that several regions were deemed to be facing a lower risk, allowing inhabitants to move about more freely.

The risk was downgraded from red, the highest level, to orange in Tuscany, Campania and the Aosta Valley, and from orange to yellow in five other regions.

On Monday, Abruzzo, the last red region, is also to turn orange, according to regional premier Marco Marilio.

On Thursday, Prime Minister Giuseppe Conte outlined a set of restrictive measures to be put in place around Christmas.

He announced a ban on movements between regions from December 21 until January 6, including for Italians who wanted to spend time in second homes.

There is also a ban on moving from one town to another for December 25 and 26 as well as on January 1.

A curfew from 10 pm until 5 am remains in place, lasting until 7 am on New Year’s Day.

Ski slopes and mechanical lifts are to remain closed until January 7.

Politics, poor training have made police stations easy targets for criminal syndicates
4 days ago
4 days ago

Politics, poor training have made police stations easy targets for criminal syndicates
4 days ago
4 days ago