After breaking records this week, with over 14 000 new daily Covid-19 cases reported, the latest report has dropped to around 11 000. “We convey our condolences to the loved ones of the departed and thank the health care workers
who treated the deceased.” 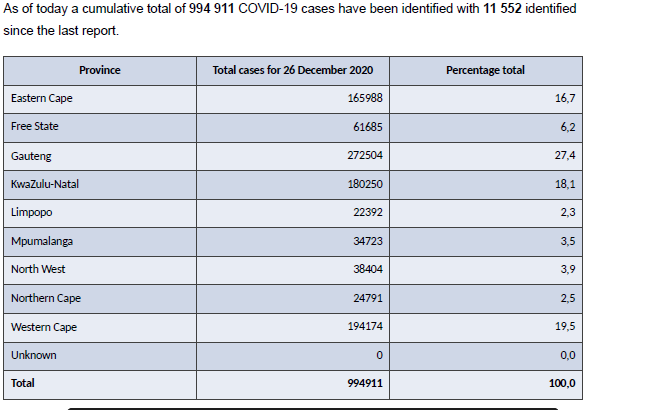 Three Latin American countries launched mass immunization programs on Thursday as fears grew in Europe over a variant coronavirus strain that is believed to be far more contagious than the original version.

Frontline medical staff in Mexico and Chile were among the first to receive their vaccines while Costa Rica began its own immunization program, with President Carlos Alvarado hailing what “may be the beginning of the end of this pandemic.”

But global optimism was tempered as China and Brazil joined more than 50 governments restricting flights from Britain or air traffic in both directions, after the highly infectious new coronavirus strain first appeared there.

Thousands of trucks remained stranded at a major British port as France sent 10,000 kits to test drivers before allowing them to cross the Channel.

Despite the new strain that British Prime Minister Boris Johnson said was “up to 70 percent more transmissible” than the original coronavirus, Britain said rail and sea links with France would remain open over Christmas.

Mexico televised the start of its mass immunization program after it received its first 3,000 doses of the Pfizer/BioNTech vaccine from Belgium.

“It’s the best gift I could receive in 2020,” 59-year-old Mexican nurse Maria Irene Ramirez said as she received the injection at a hospital in the capital.

Mexico has registered more than 120,000 Covid-19 deaths — the world’s fourth highest toll after the United States, Brazil and India.

In Chile, 46-year-old nursing assistant Zulema Riquelme was the first person shown receiving the jab in the presence of President Sebastian Pinera.

“I’m very excited and nervous,” she said, hours after the first 10,000 doses of the Pfizer-BioNTech vaccine arrived by plane.

Elizabeth Castillo, a wheelchair-bound, 91-year-old nursing home resident, was the first person in Costa Rica to be vaccinated.

“I am very grateful to God, because I have asked so much of him. My life is very important to me, so take advantage of every moment,” she said.

Argentina, meanwhile, received the first 300,000 doses of Russia’s controversial Sputnik V vaccine on Thursday on a special flight from Moscow.

The country is the first in Latin America to approve the Russian vaccine.

Argentina’s President Alberto Fernandez has vowed to receive the first Sputnik V shot to prove it is reliable after criticism that it was registered before the start of large-scale clinical trials.

Some of the thousands of lorry drivers stuck near the British port of Dover said they feared there was little chance of making it back into mainland Europe in time for the holidays.

“Home for Christmas? Forget it,” said Laurent Beghin, a French trucker who has been stranded in England since Sunday.

British Transport Minister Grant Shapps gave some hope in a Twitter post revealing that the rail and sea border with France would “remain open.”

Passengers with negative virus tests on Wednesday boarded the first Eurostar trains from London to France since border closures were introduced on Sunday.

The new strain of the virus that surfaced in Britain and has been detected in small numbers elsewhere, appeared for the first time in Germany after a woman flew in from London.

Although it appears to spread more easily, experts say there is no evidence it is more lethal or resistant to vaccines.

But the new variant, which is on average 56 per cent more contagious, is likely to boost hospitalizations and deaths from Covid-19 next year, according to a study by the Centre for Mathematical Modelling of Infectious Diseases at the London School of Hygiene and Tropical Medicine.

New restrictions came into force on Thursday in Italy, one of the worst-hit countries with more than 70,000 reported coronavirus deaths — half of them in the past three months.

Austria allowed its more than 400 ski stations to open on Thursday, just two days before entering a third nationwide lockdown that will force shops and much of the service industry to close until mid-January.

Israel said it would announce a third national lockdown from 5:00 pm (1500 GMT) on Sunday for two weeks.

– Vatican mass brought forward –
Fears over the new strain and surging coronavirus infections in general across Europe have severely dampened the mood over the holiday season.

Russia on Thursday registered a record 29,935 new infections, bringing the country’s caseload to more than 2.96 million — the fourth-highest in the world.

Germany has been forced to cancel its famous Christmas markets and Pope Francis plans to bring the Vatican’s Christmas midnight mass-forward by two hours to meet Italy’s curfew rules.

The European Union is preparing to kick off vaccinations across the bloc on Sunday, hoping to turn the corner in the fight against the virus, which has infected more than 78 million people worldwide with more than 1.7 million deaths.

Despite a new cluster of cases, Australia’s biggest city Sydney still plans to celebrate the start of 2021 with its famous Harbour Bridge fireworks — but people are being encouraged to watch it on TV at home.

In Bethlehem — which Christians believe is the birthplace of Jesus Christ — Christmas mass will be held without worshippers and broadcast online.

Egypt has called off all New Year’s celebrations in order to stem a rise in cases.