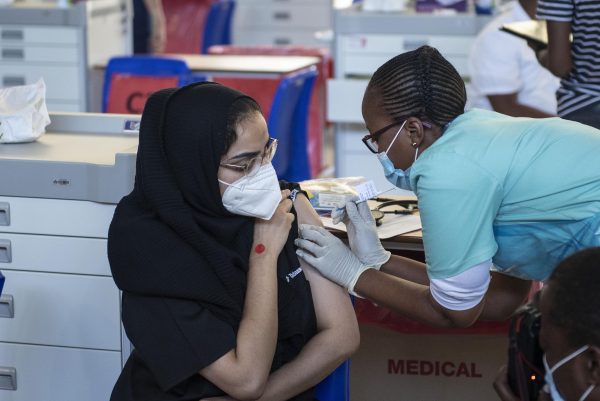 As of Saturday, 20 February 2021, the cumulative number of detected Covid-19 cases is 1,502 367with 1,690 new cases identified, Health Minister Dr Zweli Mkhize has confirmed.

81 more Covid-19 related deaths were reported, with 3 from Eastern Cape, 5 from Free State, 29 from Gauteng, 23 from Kwa-Zulu Natal (KZN), 0 from Limpopo, 6 from Mpumalanga and 15 from Western Cape.

The number of healthcare workers vaccinated is now at 10,414 as of Saturday.

More than 200 million coronavirus doses have been administered worldwide, according to an AFP tally at 1000 GMT Saturday, although 45 per cent were in the wealthy G7 nations and 92 per cent in countries ranked high- or upper-middle income by the World Bank.

Israel is far ahead of any other country worldwide with almost half its population having received at least one vaccine dose and one-third both doses needed for full protection.

Russia says 120,000 doses of its third authorised coronavirus vaccine, CoviVac, will reach people by March, following in the footsteps of the Sputnik V and EpiVacCorona shots.

The new vaccine, still in final stage clinical trials, was produced by the state-run Chumakov Centre based in Moscow and employed a different method of development from Sputnik and EpiVacCorona, using an inactive virus.

Calling it a “small but important step in a long journey”, New Zealand starts its vaccination programme with the initial focus on high-risk citizens and those returning from overseas, along with border and quarantine workers.

Despite the vaccine program, the New Zealand government has said it is unlikely overseas tourists will be allowed to return this year.

Gines Gonzalez Garci, 75, steps down from his job as Argentina’s health minister after it emerged that friends of his had been able to skip the line for vaccination.

So far only health workers have been vaccinated in Argentina and vaccinations for people aged over 70 only began on Wednesday in the province of Buenos Aires.

Romania says it has vaccinated almost 300 homeless people in the days since making them a priority alongside the elderly and the chronically ill, saying they have little chance of protecting themselves against infection.

Bucharest decided to move the homeless up the priority scale — following in Denmark’s footsteps — after pressure from charity groups.

The United States remains the worst-affected country with 495,804 deaths from 28,006,085 cases, followed by Brazil, Mexico, India and Britain.