Indian virus variant is in SA – What is it and what now?

Many South Africans have been anxious about the so-called ‘India variant’ as the outbreak on the sub-continent has raged out of control in recent weeks. 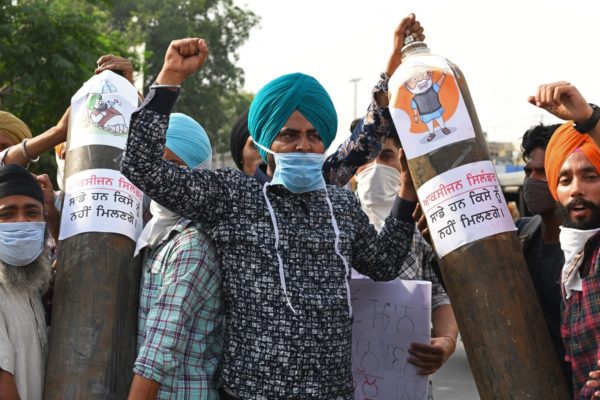 File picture. Demonstrators hold oxygen cylinders as they shout slogans against the lawmakers during a protest over the shortage of oxygen cylinders amid Covid-19 coronavirus pandemic in Amritsar on 30 April 2021. Picture: AFP.

A Covid-19 variant, first detected in India and coded as B.1.617, has officially been found in South Africa.

On Sunday morning, the National Institute for Communicable Diseases (NICD), explained in a statement that four cases of B.1.617.2 had been identified – two in Gauteng and two in KwaZulu-Natal.

“All cases have been isolated and managed according to Covid-19 case management guidelines and contact tracing has been performed in order to limit the spread of this variant,” the institute said.

Many South Africans have been anxious about the so-called ‘India variant’ as the outbreak on the sub-continent has raged out of control in recent weeks.

This is because the variant is more contagious than other variants currently circulating around the globe.

As a result, health systems are quickly overwhelmed, leading to oxygen supply shortages, overflowing hospitals, and eventually massive spikes in deaths, as experienced in India in recent weeks.

The situation in India

On Saturday, 400,000 new infections were recorded. India now accounts for nearly half of the world’s new known cases.

Officially, 238,270 deaths have been linked to the virus and on Saturday deaths surged past the 4,000 mark for the first time in a single day.

World Health Organisation (WHO) chief scientist Soumya Swaminathan told AFP “early signs were missed (in India) until it reached the point at which it was taking off vertically”, meaning “it’s multiplying at a rate at which it’s very difficult to stop”.

The massive outbreak in India has African scientists and leaders on edge as there are fears that the continent could also experience an uncontrollable outbreak.

At the same time, vaccine rollout on the continent has been significantly slower than in Western countries.

The WHO has listed B.1.617 as a “variant of interest” and not yet as a “variant of concern”. If it was to be labelled the latter, it would mean that the variant is officially classified as being more dangerous than the original version of the virus.

There are also fears that the variant might be “resistant to antibodies that are generated by vaccination or by natural infection,” Swaminathan said. Skilled technicians monitor medical oxygen refilling lines at a supply plant in Ahmedabad on May 3, 2021, as the demand for medical oxygen increased amid Covid-19 coronavirus pandemic. (Photo by Sam PANTHAKY / AFP)

However, Swaminathan expects it is only a matter of time before the classification is made.

It is important to note that the variant is one of many circulating around the globe. Last year both the UK and South African variants caused widespread concern as these were found to be more contagious than the original Covid-19 virus that had swept across the globe.

But Swaminathan insisted that the variant alone could not be blamed for the dramatic surge in cases and deaths seen in India, lamenting that the country appeared to have let down its guard down, with “huge social mixing and large gatherings”.

And this is where the NICD warn that South Africans might also create an unnecessary risk factor on local soil.

This is because Covid fatigue presents one of the biggest dangers as people ignore non-pharmaceutical interventions such as wearing masks, washing hands and maintaining social distancing.

This week for example, new, official Covid-19 cases had already started to show and increase with the Free State government declaring that it was in a third wave and Gauteng government saying is was only a few weeks away.

What is being done?

Professor Adrian Puren, the NICD’s Acting Executive Director, said it was not surprising that the new variants had been found in the country.

For example, Health Minister Zweli Mkhize yesterday announced that 11 cases of the UK variant – B.1.1.7 – had also been identified in South Africa.

Similarly, the South African variant has also made it to other shores.

“As the epidemic progresses, the detection of new variants is inevitable,” Mkhize said. A family member offers prayers during cremation of his loved one who died due to the Covid-19 coronavirus at a cremation ground in Allahabad on May 8, 2021, as India recorded more than 4,000 coronavirus deaths in a day for the first time. (Photo by Sanjay KANOJIA / AFP)

He added that genomic surveillance helps researchers to understand variant behaviour and “refine vaccines so they remain effective”.

Variants, he said, can develop anywhere and at any time so it does not necessarily have to be imported from another country.

The minister reiterated that there was no need to panic and that testing, contact tracing, isolation and quarantine guidelines remain in place.

Puren in turn assured the public that the institute is focusing their “resources and research efforts towards understanding the variants and what the potential implications are for South Africa”.

Provincial health authorities, the NICD said, remain on “high alert and are prioritising the sequencing of Covid-19 positive samples from travellers entering the country, from India specifically and their close contacts”.

In the meantime, authorities insist that people continue to adhere to basic protocols such as mask-wearing, social distancing and hand washing.