Cele: People who violated lockdown laws in Nkandla will be arrested

Outcry over gatherings outside Zuma's homestead. 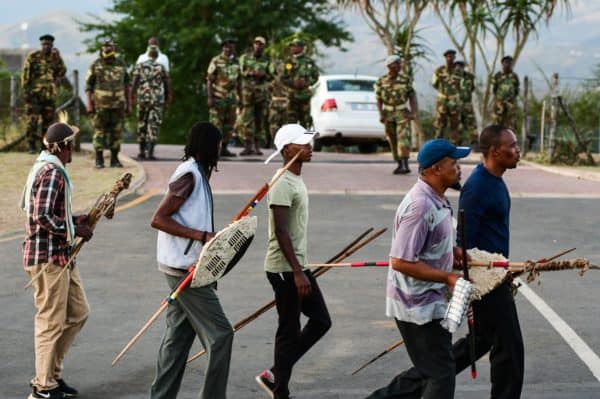 Amabutho walk past MKMVA members at the entrance to the Zuma homestead in Nkandla, KwaZulu-Natal. This comes after the former president was found guilty of contempt of court by the Constitutional Court. Zuma has been sentenced to 15 months imprisonment. Picture: Gallo Images

Police Minister Bheki Cele says arrests will be made after the non-compliance with the Disaster Management Act, and defiance of the Covid-19 regulations outside former president Jacob Zuma’s Nkandla homestead in KwaZulu-Natal.

This is despite Minister of Human Settlements, Water and Sanitation Lindiwe Sisulu seemingly dismissing suggestions that lockdown regulations were flouted.

Scores of Zuma’s supporters flocked to Nkandla homestead over the weekend to stand in solidarity with the former president after he was sentenced to 15 months in prison for contempt of the Constitutional Court (ConCourt) last week Tuesday.

In light of the situation, Sisulu, who is an ANC National Executive Committee member, was then deployed at Nkandla as per instruction by the ruling party to “make sure that everything was in order”. 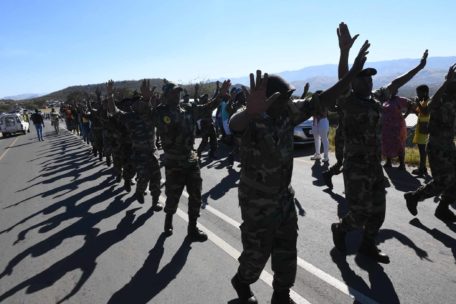 2/4
Members of the ANC, MKMVA and AUmkhonto we Sizwe members in Nkandla on Saturday. Picture: Gallo Images 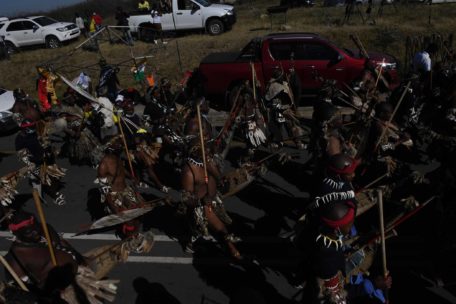 There has been an uproar over the gatherings at Nkandla, in which many people say defied the adjusted Level 4 lockdown regulations while the police who were present and did nothing.

This is amid the sharp rise of Covid-19 infections driven by the new delta variant.

‘I was very satisfied’

Speaking to 702′s Clement Manyathela on Monday morning, Sisulu dismissed claims that the police did not carry out their duties.

“The police were very good yesterday,” the minister said.

Sisulu indicated that what she saw at Nkandla was very different to the narrative being carried out.

“Watch the visuals of the eNCA. By the time I was there… everything was okay. I was very satisfied with the situation. I was not there for more than an hour then I left having monitored the situation,” she said.

However, Sisulu’s comments is in contrast to what Police Minister Bheki Cele has said.

Speaking at the launch of the vaccination roll-out for police officers in Soweto on Monday, Cele told the media that there was over 100 people, who had firearms, at Nkandla.

Cele dismissed claims that the police were not present, saying that more than 200 police officers were deployed.

The minister said the police had video footage, which show Zuma’s supporters violating lockdown regulations among other illegal activities, according to Jacaranda News.

He explained that the police did not take action against the supporters as the officers had to keep the situation under control in order to avoid disasters like the Marikana incident.

He added that arrests would be made for those who flouted lockdown regulations.

“Just because we didn’t pick them on that day, it doesn’t mean we’re not going to,” he said.

Meanwhile, Democratic Alliance (DA) leader John Steenhuisen has since called on President Cyril Ramaphosa to take action against Zuma and his supporters for being in violation of the lockdown regulations.

“It is unthinkable that while the liquor industry, small business, and restaurants have had to endure devastating losses to adhere to these restrictions, members of the ANC and Jacob Zuma’s RET faction can seemingly break them without consequence.

ALSO READ: Level 4 adjustments: Here’s what you can and can’t do

“The president’s silence on this matter only reinforces what many South Africans have come to believe: that nobody is above the law, except those connected to the ANC’s elite,” the DA leader said in a statement.

Steenhuisen said lockdown regulations at any level must either be enforced with consistency or scrapped altogether.

“There is no reason why restaurants cannot host a sit-down dinner service, or bars cannot safely serve patrons if thousands of Zuma supporters can gather on a whim without consequence,” he added.