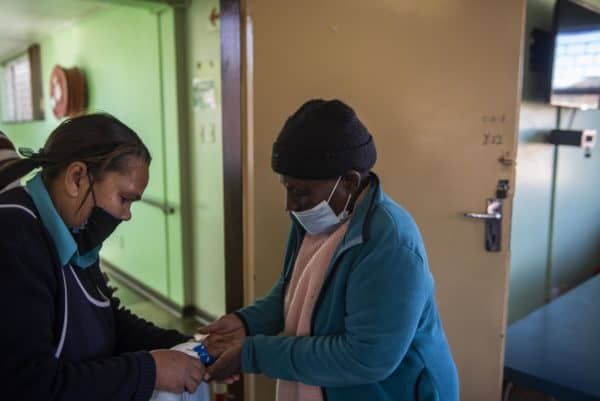 Nurse Julia Kanie helps a resident with hand sanitizer during a visit by Deputy Minister of Social Development Ms Hendrietta Bogopane-Zulu in partnership with the United Nations family conduct a full assessment to ensure compliance with regulations and health protocols while ensuring that the prescribed services meant for communities are fully operational on June 30, 2020 in Pretoria, South Africa. According to a media release, the operation is an ongoing national response measures to contain and mitigate the effects of COVID-19 on Social Development beneficiaries and families. (Photo by Gallo Images/Alet Pretorius)

As of Saturday, 2 October, the cumulative number of detected Covid-19 cases in South Africa is 2,905,613 with 1,306 new cases identified, the National Institute for Communicable Diseases (NICD) confirmed.

This represents a 4.0% positivity rate.

48 more Covid-19 related deaths were reported, bringing the total number of deaths to 87,753.

17,760,235 tests in total have been conducted to date in both public and private sectors. The country currently has 38,967 active cases.

A further 51 hospital admissions were reported in the past 24 hours. The total number of vaccines administered in the country so far stands at 17,815,485.

US fatalities from Covid-19 surpass 700,000, according to figures from Johns Hopkins University, a toll roughly equivalent to the population of the nation’s capital Washington.

The grim threshold comes with an average of well over 1,000 dying each day, in a country where 55.7 percent of the population is now fully vaccinated, according to the Centers for Disease Control and Prevention.

Vaccine soon to be compulsory for California school pupils

Covid vaccinations will be compulsory for all school students in California, the state’s governor announces — a first in the United States, where vaccine hesitancy has slowed efforts to end the pandemic.

The plan will be phased in as Food and Drug Administration regulators grant full approval for use on younger age groups.

The rules are set to affect six million students in America’s most populous state, where 84 percent of all eligible residents have received at least one dose of the vaccine.

Berlin’s famed Berghain night club reopens its doors, 19 months after it shut up shop due to the pandemic.

Proof of vaccination or a recent recovery from the virus will be required to make it inside the club housed in a former power plant in the German capital.

Nicaragua, which faces a sharp rise in coronavirus cases, approves the emergency use of the two antiviral vaccines developed by Cuba, Abdala and Soberana 02, the public company BioCubaFarma announces on Twitter.

Guadeloupe will begin its first phase of deconfinement on October 8 in view of a “decrease in the indicators of the epidemic for nearly 6 consecutive weeks”, the prefect of the French island announces.

The coronavirus has killed at least 4,789,971 people since the outbreak emerged in China in December 2019, according to an AFP compilation of official data.