The girl was part of a group who were allegedly assaulted to rid them of demons. It is alleged that those involved tried to conceal the death by telling police the girl committed suicide while possessed. 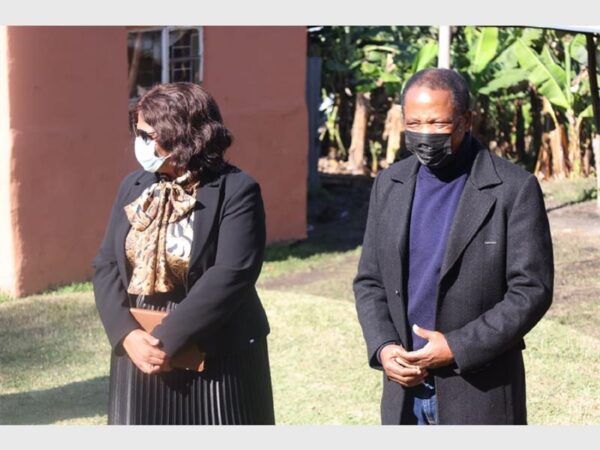 KwaZulu-Natal Social Development MEC, Nonhlanhla Khoza and KwaNzimakwe Traditional Council leader, Inkosi Bhekizizwe Nzimakwe during a visit to the families of the children who were allegedly assaulted. Photo: Pretoria Rekord.

A 17-year-old girl died, after a pastor in KwaNzimakwe near Port Edward, together with congregants, allegedly beat up five children, who they say were being controlled by demons.

The children were held from the 25 to 29 May. It is also alleged those involved attempted to conceal the death of the girl by moving the surviving children, and eventually releasing them to their respective parents.

It is further alleged that the group of teenagers also had water and salt poured over their bodies and noses, all in the quest to get rid of the demons inside of them.

According to provincial police spokesperson, Brigadier Jay Naicker, policemen from Port Edward received a report of a person who had died at Braemar area on May 29.

They were shown the body of a teen who had injuries to her body.

“Police were told that the victim committed suicide because she was possessed by demons. An inquest docket was opened for investigation,” he said.

However, the post-mortem results later indicated that she died due to injuries sustained following a severe assault.

Then, on June 3, police also received a report of a 16-year-old girl who was treated for injuries at a local clinic and was taken to hospital for medical attention

Naicker said it was then established that there were another three girls, aged between 15 and 18, that were rescued from the house.

The pastor, aged 40 appeared in the Port Shepstone Magistrate’s court this week on charges of murder, attempted murder and assault with intent to inflict grievous bodily harm.

The case has been postponed to June 20 for bail application.

The KwaZulu-Natal Department of Social Development MEC, Nonhlanhla Khoza has called for all involved in the assault to be arrested.

Khoza visited the bereaved family to express her condolences on Monday.

“It is unfortunate that people who are supposed to protect children, including the church, got involved in such abuse, leading to the death of a child. We want to see all those involved in the assault, torturing and brutal killing of children arrested,” she said.

KwaNzimakwe Traditional Council leader, Inkosi Bhekizizwe Nzimakwe, said he was in pain that such a horrible incident happened in the clan and no one reported it.

“We are in pain that the church is the one that led to the death of this child. We are disappointed that Christians played a role in the killing of this child. In our traditional council we have many cases of church leaders who fight among themselves. We are dealing with such cases because they want to compete instead of helping the poor community,” said Inkosi Nzimakwe