The US is the world's hardest-hit country with more than 405,000 deaths. 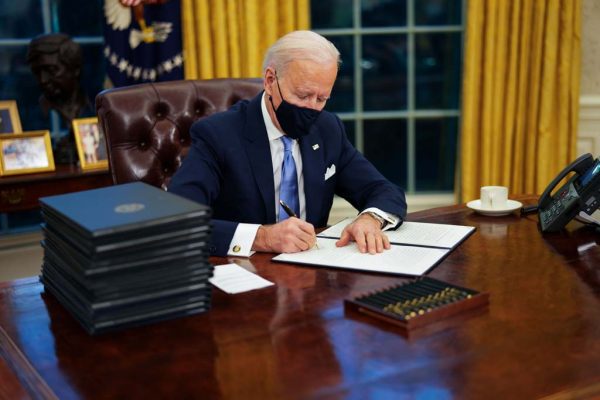 File picture. US President Joe Biden signs executive order on Covid-19 during his first minutes in the Oval Office, in the White House, Washington, DC, USA, 20 January 2021, following his inauguration as 46th President of the United States of America. EPA-EFE/Doug Mills / POOL

President Joe Biden’s administration unveiled Thursday its plan to turn the tide on Covid-19 in America, where 400,000 people have died, as the US leader tackled his first full day in the White House.

Officials said Biden would immediately sign 10 executive orders and other directives to jumpstart the national strategy.

Experts have said that was sorely missing under his predecessor Donald Trump – and on Thursday Biden’s communications director Kate Bedingfield said the outgoing administration had left little in the way of a vaccination distribution program.

There was “not a lot of detail,” she told CNN – but she added that Biden would sign executive orders that same day to invoke emergency legislation to increase industrial production and “just to make sure that we have the material that we need to get these vaccinations into arms around the country.”

The Biden administration would be “laser-focused” on that going forward, she added, saying it seeks to increase supply, boost distribution and secure the funding to make it all happen.

The US is the world’s hardest-hit country with more than 405,000 deaths, and government models suggest the B.1.1.7 variant imported from Britain could supercharge the outbreak’s trajectory in the coming months.

Biden’s presidency will initially be shaped by his response to Covid-19 and the associated economic emergency.

Whereas Trump seldom acknowledged the tragic toll the virus was inflicting on Americans, Biden paused in his inaugural address — which the public was essentially barred from attending due to the pandemic – to offer a moment’s silent prayer for its victims.

“We need all our strength to persevere through this dark winter. We’re entering what may be the toughest and deadliest period of the virus,” he said during the address.

The plan has organized goals like restoring the trust of the American people, boosting the vaccination campaign, and mitigating viral spread through aggressive masking and testing, while expanding the public health workforce.

It also seeks to expand emergency relief; safely reopen schools, businesses and travel; protect the most vulnerable and advance racial equity; and restore US global leadership with future pandemic preparedness.

The administration is seeking $1.9 trillion from Congress for its plans, which includes $20 billion for vaccines and $50 billion for testing.

Taken as a whole, the strategy amounts to a more closely coordinated approach than that of the previous administration, which sidelined key agencies like the Centers for Disease Control and Prevention, sought to censor recommendations by prominent scientists, and said individual states should do what seems right for them.

Some of the measures were already announced in recent days, including recommending that the eligibility criteria for vaccine priority groups be widened and simplified in order to increase the rate of shots being injected.

As it stands, the federal government has overseen the allocation of 35.9 million doses to states, of which 16.5 million have been used — or 46 percent.

The figure is well below targets set by the Trump administration, but the administration rate has been steadily ticking up in recent days.

These plans would bring the financial and logistical clout of the federal government in the fight against the virus — again, an element that had largely been missing.

The administration will also continue the policy of rolling out vaccine doses for Pfizer and Moderna’s two-shot regimes as soon as they become available.

The Trump team had initially set aside the booster as reserve, but later changed course after running low on supply.

The administration also plans to invoke the Defense Production Act to boost supply of personal protective equipment, lab equipment and to maximize vaccine production. Bedingfield said that would be among the executive orders Biden plans to sign Thursday.

Tim Manning, who will coordinate supply chain issues, told reporters he had identified 12 supply shortfalls where the law could be invoked.

Biden’s team has relentlessly criticized the Trump administration in recent weeks over its failure in particular to adequately plan for the last mile of its Covid response and get vaccines developed at record speed into arms.

An early test will be whether they achieve their own goal of vaccinating 100 million Americans within Biden’s first 100 days in office, by April 20.