The mission has a remit to explore how the virus jumped from animal to human, but questions remain over what the experts can hope to find, one year on. 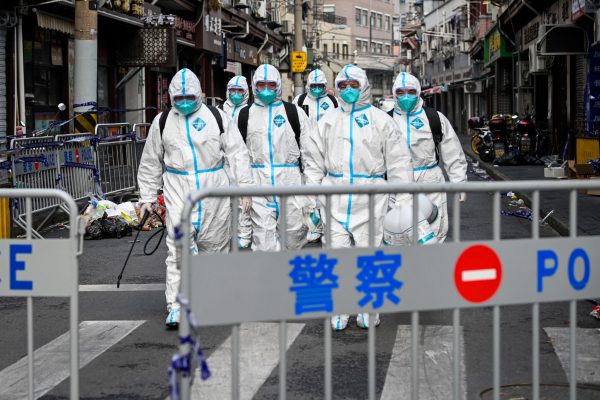 Health workers in protective gear walk out from a blocked off area after spraying disinfectant in Shanghai's Huangpu district on January 27, 2021, after residents were evacuated following the detection of a few cases of COVID-19 coronavirus in the neighbourhood. (Photo by STR / AFP)

The World Health Organization mission probing the origins of Covid-19 in China was going “very well”, one of its members said Tuesday, as the team visited an animal disease control centre in the city where the first cases were reported.

China has faced criticism at home and abroad for playing down the initial outbreak and concealing information when it first emerged in Wuhan in December 2019, raising doubts over the usefulness of the WHO trip.

The investigative team arrived at the Hubei province animal disease prevention centre in Wuhan Tuesday morning, where the group donned white hazmat suits for a tour of the facilities.

Team member Peter Daszak told journalists the mission was “excellent” and proceeding “very well” as the group was driven into the facility, while team lead Peter Ben Embarek nodded when asked if the experts were being given sufficient access in Wuhan.

The mission – delayed by China and weighed down by political baggage – has a remit to explore how the virus jumped from animal to human, but questions remain over what the experts can hope to find, one year on.

Beijing is keen to put the focus on its recovery from the outbreak.

The team of scientists toured a propaganda exhibition celebrating China’s recovery from the pandemic in Wuhan on Saturday.

Daszak said after the tour that the team had held a “very informative meeting” and also tweeted that WHO experts had met with “key staff in charge of livestock surveillance” and had “in-depth discussion.”

The experts also received a visit at their hotel on Tuesday from officials of the Wuhan Blood Centre, which collected blood plasma last year from recovered Covid-19 patients.

On Sunday the team went to the market in Wuhan where one of the first reported clusters of infections emerged over a year ago, which Daszak tweeted was a “critical” stop.

The UN agency hit back at critics on Monday, telling a press conference in Geneva, “if you have the answers… please let us know.”