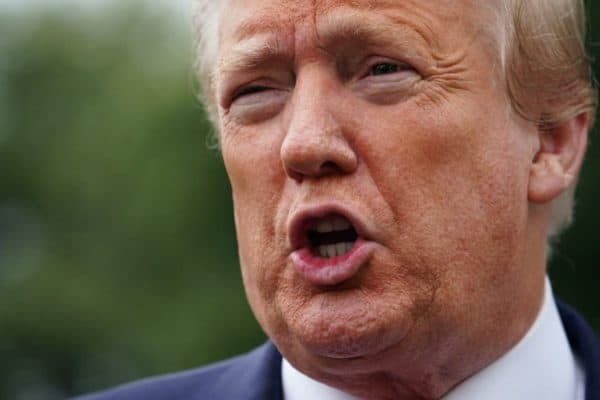 (FILES) In this file photo former US President Donald Trump speaks to the press as he departs the White House in Washington, DC, on May 21, 2020. (Photo by MANDEL NGAN / AFP)

Former US President Donald Trump on Saturday used the 20th anniversary of the 9/11 attacks to slam the “horrible” withdrawal from Afghanistan and the “incompetence” of Joe Biden’s administration during the frenzied end to America’s longest war.

“It looked like we retreated, it looked like we gave up. Like, they use the word surrender,” he told officers at the precinct, referring to the final withdrawal of US troops from Afghanistan last month following the Taliban takeover of the country.

The US military intervention in Afghanistan began in late 2001 in the wake of Al-Qaeda’s attacks on the World Trade Center in New York and the Pentagon outside the US capital.

Al-Qaeda had been sheltering in Taliban-held Afghanistan, and the US invasion toppled the extremist regime in a bid to find Al-Qaeda’s leaders.

But the Taliban soon launched an insurgency and, after two decades of war, stormed back to power last month as the US military was completing its withdrawal.

During his presidency, Trump brokered a deal with the Taliban in February 2020 that would have seen all US troops out by May 2021 in return for security guarantees from the insurgents.

But it was his successor Biden who carried out the withdrawal, moving the date back to August 31 but lifting all conditions.

The Taliban captured Kabul and the Afghan government collapsed on August 15, giving the US and its allies two weeks to conduct one of the biggest airlifts in history, marked by scenes of desperation as Afghans desperate to flee crowded the airport.

One Islamic State-claimed suicide blast at the airport killed dozens of Afghan civilians and 13 US troops during the evacuation, the highest toll for America in the war in years.

He blamed “bad planning, incredible weakness and leaders who truly didn’t understand what was happening.”

“Joe Biden and his inept administration surrendered in defeat,” Trump said in the message.

“We will struggle to recover from the embarrassment this incompetence has caused.”

Trump did not attend the formal 9/11 anniversary ceremony at Ground Zero in New York, as did Biden and former presidents Bill Clinton and Barack Obama.

Trump was to return to Florida on Saturday to provide ringside commentary at the fight between former world heavyweight champion Evander Holyfield and Brazilian mixed martial arts star Vitor Belfort.