All travellers to UK to show pre-departure virus tests

The UK earlier banned flights from South Africa and put 10 African countries on its red list. 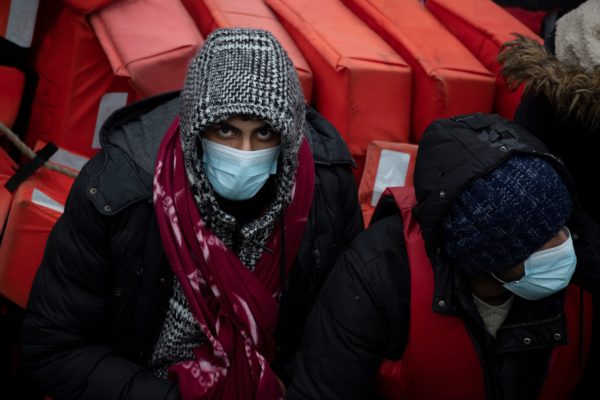 A UK Border Force patrol vessel carries migrants picked up at sea on arrival at the Marina in Dover, southeast England, on November 24, 2021. - The past three years have seen a significant rise in attempted Channel crossings by migrants, despite warnings of the dangers in the busy shipping lane between northern France and southern England, which is subject to strong currents and low temperatures. (Photo by Ben STANSALL / AFP)

The UK government has announced that those travelling into the country will need to show a negative coronavirus test pre-departure as it reintroduces Covid-19 restrictions due to the Omicron variant.

From 0400 GMT on Tuesday, anyone travelling to the UK will have to show evidence of a negative lateral flow or PCR test taken within the last 48 hours before boarding a flight, the health ministry said late Saturday.

This will apply to travellers aged over 12 from any country. Currently travellers have to take a PCR test within two days of arrival.

The reintroduction of compulsory pre-departure testing prompted an angry response from the travel industry.

Justice Secretary Dominic Raab told Sky News that he knew the new measure was a “burden for the travel industry” but stressed the UK needed to act.

“We’ve got to take the measures targeted forensically to stop the new variant seeding in this country to create a bigger problem.”

The government has vowed it “will take further decisive action if necessary to contain the virus and new variant”.

The UK earlier banned flights from South Africa and put 10 African countries on its red list, meaning only UK and Irish citizens or UK residents can travel from there to the UK. Nigeria will join the list from Monday.

Experts cautioned that travel restrictions and bans will not halt the virus spread.

Statistician David Spiegelhalter, a University of Cambridge professor who co-authored a history of the pandemic, told Sky News that “travel restrictions at the moment are only going to slow things up a little bit.. but they’re not going to stop it (Omicron) and it’s going to come in”.

England has made masks compulsory again in shops and on public transport in response to the new variant, with 160 Omicron cases confirmed for far in the UK.

The UK has also extended its booster programme to make all adults eligible.