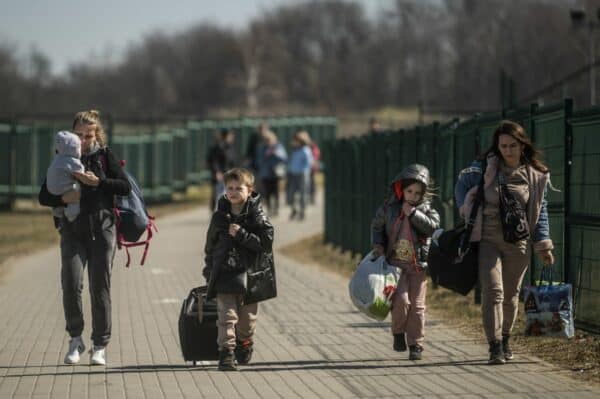 The United Nations Children’s Fund (Unicef) has revealed that a month since Russia invaded Ukraine, 4.3 million children – more than half of the country’s estimated 7.5 million child population – have been displaced.

Unicef head Catherine Russell said the war has caused one of the fastest large-scale displacements of children since World War II.

This includes more than 1.8 million who have crossed into neighbouring countries as refugees and 2.5 million who are now internally displaced.

According to the UN Human Rights Office (OHCHR), 78 children have been killed and 105 have been injured in Ukraine since the war began on 24 February.

However, it said these figures represent only those casualties that the UN has been able to confirm – with the true toll likely far higher.

“This is a grim milestone that could have lasting consequences for generations to come,” Russell warned.

The war has also devastated civilian infrastructure and limited access to basic services.

Over the last four weeks, the World Health Organisation (WHO) has reported 52 attacks that have impacted healthcare facilities across the country and Ukraine’s Education and Science Ministry has reported damage to more than 500 educational facilities.

“Essential infrastructure on which children depend, including hospitals, schools and buildings sheltering civilians, must never come under attack,” Russel said.

The humanitarian crisis has spurred NGO Gift of the Givers to intensify its campaign to assist Ukraine as the country comes under intense bombardment from Russia.

Gift of the Givers founder Dr. Imtiaz Sooliman said the NGO is expanding the teams and are organising them inside the “hotspots” and while there is no entry point for supplies the teams are replicating the process, finding shops, supplying the funds, identifying specific needs and supplying.

“When you can’t get items from outside, be resourceful and find everything inside. Orphans, the elderly, ordinary people are all being assisted. We are funding the intervention paying for fuel and everything associated with the purchase and delivery of essential and very basic necessities.”

Sooliman said the Ukraine Association of South Africa has also partnered with Gift of the Givers to assist Ukrainians devastated by the war.