Biden's announcement Thursday prompted an immediate slump in oil prices, but the crude market was choppy on Friday. 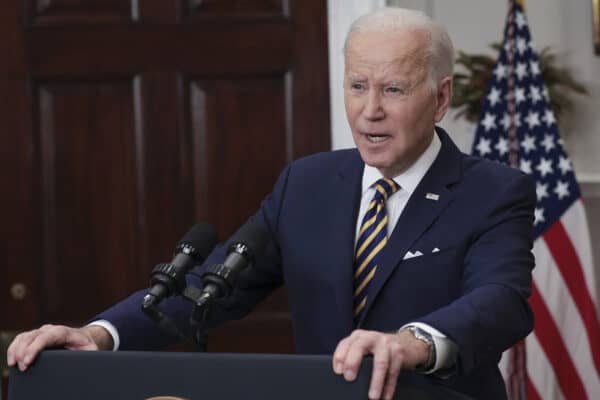 Citing the need to counteract the “Putin price hike” following Russia’s invasion of Ukraine, President Biden has announced a sweeping plan to make unprecedented use of US emergency oil stockpiles.

Under Biden’s plan, the United States will release up to a million barrels a day every day for six months from its Strategic Petroleum Reserve (SPR).

On Friday, the International Energy Agency announced that a group of 30 other countries will also release crude onto the market from strategic holdings following an emergency meeting in Paris.

Biden’s announcement Thursday prompted an immediate slump in oil prices, but the crude market was choppy on Friday, suggesting investor skepticism that the emergency releases will change the picture.

Below are some of the main questions about the SPR and the likely impact of the policy.

– What is the Strategic Petroleum Reserve ? –

Set up in 1975 following the 1973 Arab oil embargo, the SPR is maintained in immense salt caverns along the Gulf of Mexico. The IEA requires members to hold 90 days of import protection, a requirement the United States has traditionally met with SPR and industry stocks.

If the United States goes forward with Biden’s plan, it would reduce the SPR to levels not seen since the mid-1980s.

– How does Biden’s plan compare with past uses?

The White House’s plan dwarfs previous SPR releases, which included President George H.W. Bush ordering about 17 million barrels released during the first Gulf War in 1991 and a 2011 release by President Barack Obama of 30.6 million barrels due to the disruption of Libyan production.

The announcement marks Biden’s third move to tap the SPR.

In November, the United States announced it was putting out 50 million barrels of oil in response to soaring inflation amid pandemic-exacerbated supply chain snarls. Early last month, Washington also joined a 60 million emergency release announced by the IEA to address disruption from the Russian invasion.

Given the scale of the release, some analysts have said Energy Department officials may have trouble finding buyers for crude, or face infrastructure bottlenecks. A note from JPMorgan Chase predicted the release would add 850,000 barrels per day, rather than one million,

Bill O’Grady, chief market strategist at Confluence Investment Management, said that the move comes as the long-term need for so much stockpiling looks less acute because of decarbonization efforts to address climate change and as the US shale boom has lessened the need for imports.

“I don’t think that oil will ever be replaced,” O’Grady said.

– Will it bring down prices? –

Oil prices ended about three percent lower on Thursday following the official announcement after falling even more on the initial reports about the plan.

“The market reacted immediately after the announcement was made,” said Andy Lipow of Lipow Oil Associates in Houston, who thinks gasoline prices will fall 10 to 15 cents a gallon due to the SPR release.

The move comes as the US president faces long odds in the November midterm elections, as runaway consumer prices weigh threaten to overshadow a strong labor market.

Biden described the policy as meant to “ease the pain” of lofty gas prices, which now stand above $4.20 a gallon, up almost 50 percent from last year.

But now that the announcement has been priced in, “the market will look to the next headline for direction,” Lipow said.

The quantity of oil is more than twice the increased output just offered by the OPEC+ group of exporters, and will “give us some relief,” said Krane.

But the extended nature of the SPR plan could blunt some of the longer-term impact if US shale producers defer investments in new drilling, or OPEC opts against shifting from its current austerity posture.

Biden has almost no other levers for lowering oil prices, said Krane, who notes “the US does not have a national oil company that takes orders from the government.”

Oil prices were already elevated prior to the Ukraine invasion, but Russia’s attack prompted crude prices to spike to almost $140 a barrel in early March after the United States banned Russian energy imports — not far from their all-time high.

While other oil importing countries have not followed the US lead, some analysts have estimated that as much as three million barrels a day may be sidelined by crude buyers “self sanctioning,” adding to uncertainty in a period when inventories lag historic levels.