A lawyers says there have been 51 abductions, with people 'being brutally tortured and then dumped'. 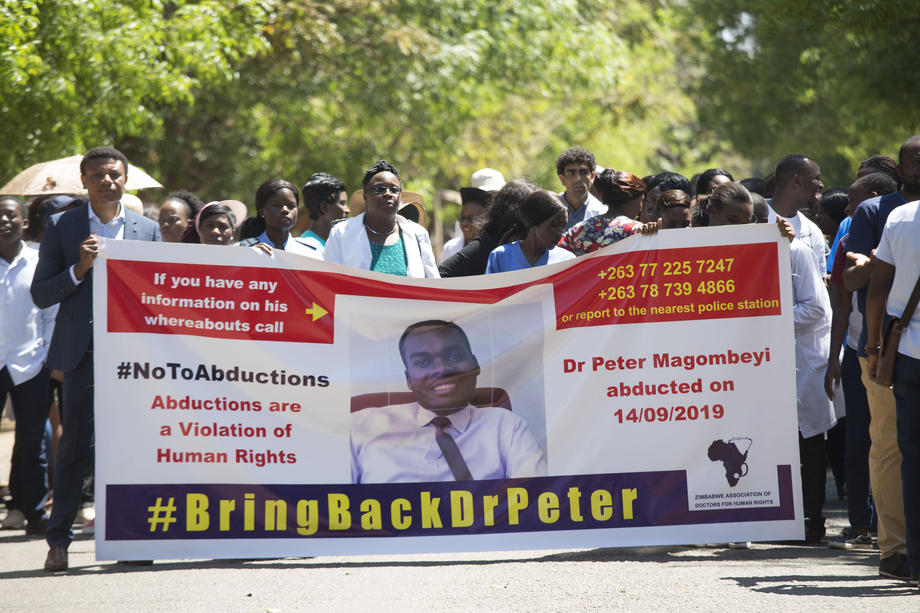 Doctors protest over the abduction of the president of the Zimbabwe Hospital Doctors Association, Peter Magombeyi, outside of the Parirenyatwa Hospital in Harare, Zimbabwe, 18 September 2019. Picture: EPA-EFE / AARON UFUMELI

In Zimbabwe, doctors say they will continue to take strike action, despite the kidnapping of their union leader.

Peter Magombeyi, who disappeared during a pay strike last week, has been found alive.

Obert Masaraure, who runs a teachers’ union, told Al Jazeera he was also abducted three months ago, taken to a secluded area and beaten, for organising a teachers’ strike over pay.

Activists say dozens of protesters have been abducted since January.

Lawyer Doug Coltard told Al Jazeera about “people breaking into houses with masks on armed with military grade weapons such as AK47s”, adding that the abductions typically involve “people being brutally tortured and then dumped”.

“Now with most of the 51 abductions that we have seen people have turned up the next day, with some, like Blessing Toronga, he turned up in a mortuary some months later,” he added.

Al Jazeera was not able to independently verify Coltard’s numbers. The Zimbabwean government has denied allegations of human rights abuses.

In the video below, Al Jazeera’s Haru Mutasa reports from Harare.