Awwalun Daudawa led a series of mass abductions by heavily armed criminal gangs who have become an increasing security challenge in Nigeria. 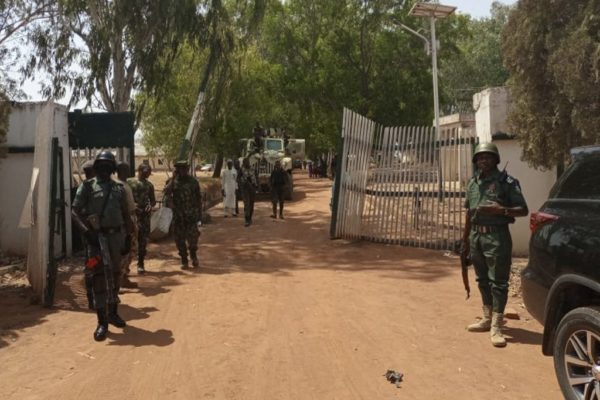 Nigerian soldiers and police officers stand at the entrance of the Federal College of Forestry Mechanisation in Mando, Kaduna state, on 12 March 2021, after a kidnap gang stormed the school shooting indiscriminately before taking at least 30 students around 9.30pm (2030 GMT) on 11 March 2021. Gunmen raided a college in northwestern Nigeria and kidnapped at least 30 students, government officials and parents said on 12 March 2021, in the latest mass abduction targeting a school. Picture: Bosan Yakusak/AFP

A Nigerian bandit chief who led the kidnapping of hundreds of schoolchildren has been killed in armed clashes with a rival gang, days after reneging on an amnesty deal with authorities, sources told AFP.

It was one of a series of mass abductions by heavily armed criminal gangs who have become an increasing security challenge in northwest and central Nigeria.

On Thursday a Zamfara state government official told AFP Daudawa had reneged on a peace pact he made in February and returned to lead his men in the forest.

“Daudawa was killed along with four of his commanders Friday afternoon during a gun fight with a rival gang in Dumburum forest on the border with Katsina state,” a Zamfara government official said.

“He led his men on a revenge mission to avenge the death of two of his men by the rival gang during a failed raid on one of his camps last month,” said the official.

In February Daudawa along with six comrades surrendered to Zamfara state governor Bello Matawalle in his office where he handed over weapons, saying he had renounced crime, as part of the amnesty to bandits to end the cycle of violence.

– Ambushed and gunned down –

But sources said Daudawa only surrendered a fraction of his weapons and maintained contact with his gangs in the forest.

Earlier this month Daudawa left his lodging in Zamfara state capital Gusau on the pretext of meeting some criminal gangs to convince them to accept a government amnesty offer and release some hostages, according to an official.

“Daudawa has been killed along with his four commanders during fighting with the men of rival bandits,” a source with deep knowledge on the activities of bandits told AFP.

“He was ambushed and gunned down while trying to take away the herd of the rival gang,” said the source.

It was not clear what impact the death of Daudawa would have on the deadly violence cattle thieves and kidnappers have unleashed in northwestern Nigeria.

Some of the Kankara schoolchildren had escaped during the December kidnapping and more than 300 more were released days later after negotiations with local officials.

State authorities always deny any ransom payments were made.

Daudawa, 43, was an armed robber and a cattle rustler before he added gun-running and kidnapping for ransom to his criminal portfolio.

He was known to have ties with Boko Haram jihadists and acted as their gunrunner, selling weapons they seize from Nigerian security personnel in the northeast to bandits in the northwest.

Cholera kills over 2,300 in Nigeria's worst outbreak in years
4 days ago
4 days ago

Cholera kills over 2,300 in Nigeria's worst outbreak in years
4 days ago
4 days ago