How successful has Telkom’s FreeMe really been?

Headcount continues to decline and a few other things you didn’t know about the group.

Telkom has for the first time disclosed the number of subscribers on its FreeMe data-focused contract packages. In its annual report, published on Tuesday, the operator said that of its post-paid subscribers, 13% use FreeMe, of which 79% are new customers. FreeMe was launched in July 2016, which means it has only been available for nine months in its last financial year. FreeMe Family – which allows for a single plan to be shared among multiple users – was launched in February 2017, towards the end of the period.

The total number of post-paid subscribers as at March 31 was 1.227 million, out of a total mobile base of 3.999 million. This means that just shy of 160 000 (contract) customers are on FreeMe. This in itself is not a significant amount, but the fact that eight out of every ten new customers who do so are new to the operator is critical. In other words, 126 000 post-paid subscribers are new to the network since the launch of FreeMe. This equates to nearly 40% of the 433 000 new contract customers added in the year. The bulk of the remainder is surely on its data-only SIM contracts (using dongles/routers).

FreeMe is driving subscriber growth in Telkom’s contract base, and is helping stabilise average revenue per user (ARPU). The group says post-paid “ARPU of R181 [was] supported by FreeMe”. This is flat from the previous year (R181.41 vs R181.69), which gives some idea of how the data-only-plus-dongle contracts are driving down ARPU in that base.

Headcount still being managed down

Group headcount continues to decline, arguably one of Sipho Maseko’s biggest achievements since he took over as Group CEO (see Telkom’s headcount cuts are steeper than you think). At that time (in April 2013), Telkom had 21 209 employees. It’s been on a steady downward path, with the total in the Telkom company now at 10 743. This is 22% lower than the prior year, but was impacted by the transfer of 1 180 employees (from its Enterprise and data centre units) to BCX. Without this, however, there was still a 13% drop. Telkom says this is due to “the effect of the voluntary early retirement package and voluntary severance packages offered”. Total groupheadcount was reduced from 20 341 to 18 847. 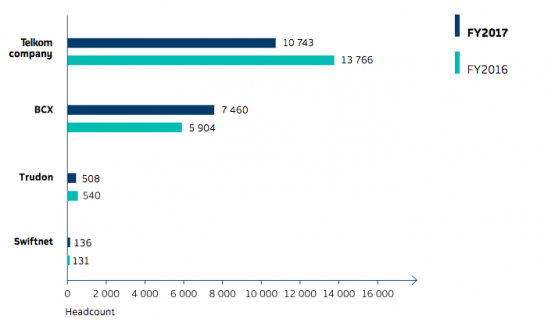 Telkom says the 9% decrease in carbon emissions from the prior year is primarily attributed to:

In the year, a 3MW grid-tied solar photo-voltaic (PV) plant at its head office campus became fully operational. The company says that since then the R88 million plant has generated 3708 MWh, adding that this equates to 90% of daytime energy demand on campus (excluding the data centre).

Fixed-line now less than a third of the business

The ‘Telkom’ fixed-line business which we interact with as consumers is now 28% (R8.974bn) of the group’s total net operating revenue. By comparison, BCX is nearly double the size, at R16.559 billion. Its mobile unit generated R2.004 billion in revenue in FY2017, while the wholesale division (openserve) booked R3.819 billion in net operating revenue (from external customers).

Orchids and Onions: Misguided and 'crass' PR messaging is enough to bring tears to the eyes
2 days ago
2 days ago

Orchids and Onions: Misguided and 'crass' PR messaging is enough to bring tears to the eyes
2 days ago
2 days ago