Life has become one big challenge under the ANC

The predators who govern have become worse than their apartheid predecessors. 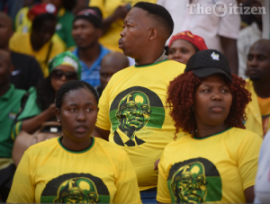 ANC party supporters enjoy the day's events at the Nelson Mandela Bay Stadium, 16 April 2016, during the launch of the organisation's local government elections manifesto which was highlighted by an address by President Jacob Zuma. Picture: Refilwe Modise

Life under ANC rule has been one big challenge. From extreme highs to extreme lows, there is a feeling of general decline. As a consumer, I find that access to services and products is no longer as easily accessible as before. Service providers such as Telkom, Metrorail and Eskom are incompetent.

The organisation that I run has been trying to enlist several service providers to address our information technology deficits.

Some have promised to address the problem within eight weeks; others have ordered electronic components that are not readily available until one gives up. Everything is a chore.

Global companies operating here quickly adapt to the climate of mediocrity and become equally inept. My experiences with the iStore, a company reportedly of global repute, have been dismal.

When tweeting about it one discovers hundreds of others who share the same disappointment with inadequate services. The lack of competition leaves one with few alternatives.

The feeling that skills and expertise are fleeing the country is real. Those who remain are mediocre and struggle to survive because access to finance for small businesses is a tall order.

Statistician-General Pali Lehohla confirmed this, saying that while education is one of the biggest challenges facing SA, the public raised clean water and electricity as major concerns.

“An important dimension of sustainable development is quality education for all‚ but citizens’ perceptions are inconsistent because their attention is focused on immediate needs like water that is clean‚ accessible and affordable. Politicians and civil servants must work extra hard to resolve the burning issues of the present.”

By its own admission, government recently claimed the dearth of skills at the local level has led to service delivery failure in especially poor communities.

The excruciatingly high school drop out rates, the high failure rates at universities, and the lack of vocational training schools, mark the colossal failure of the ANC government to uplift black people.

Kader Asmal promised to make adult education and early childhood development, a high priority. That never happened and today we sit with a legacy of under-educated parents who cannot help their illiterate children.

The tragedy is that the ANC government prior to President Jacob Zuma’s takeover had the chance to lift black people out of poverty by creating jobs and wealth. They failed.

With billions of rands wasted, one cannot help but think what South Africa could have been like if taxpayers’ money were accountably used.

After more than two decades of democracy, Zuma still blames white people. Without white people, Zuma will lose the reason for his existence.

The year 1994 was meant to be the beginning of redress. Alas, the majority is still excluded, because the predators who govern have become worse than their apartheid predecessors.