Unless the government summons the political courage to deal with public violence by its citizenry, SA is fast heading for a tipping point. 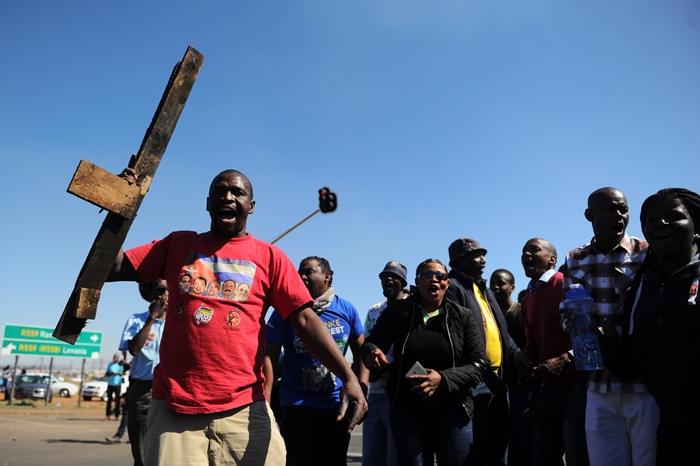 Residents of Protea Glen, Soweto, protest along the R559, 7 May 2018, following an attempted land grab situation in the area. The residents have warned illegal land invaders to stay away from a piece of land near the Soweto suburb. Picture: Michel Bega

South Africa is burning. It’s not yet a conflagration but to ignore its potential to become one would be a terrible mistake.

The fiery eruptions are claimed to be about failed service delivery, or corruption, or too little policing. Or, in the case of taxi protests, too much policing. Or all of the above.

You can call the result resistance. Call it revolution. Call it insurrection. Or cloak it in euphemism: “Angry protests …”

Whatever the terminology, things are poised. The sporadic community violence that has been bubbling nationwide for years appears to becoming more frequent, more brazen, more organised and more directed at securing specific political outcomes.

In North West, for two months there has been ongoing violence with tyre-burning, looting mobs. Union vigilantes have barricaded hospitals and clinics. The police have responded cautiously, as President Cyril Ramaphosa seeks a political solution – getting rid of the premier and installing a more capable, less corrupt administration.

In KwaZulu-Natal the N3 highway was closed for almost 48 hours. The “protesters” looted and set alight 35 long-haul trucks, causing hundreds of millions of rands of losses.

It was the second such incident within days, yet the police managed to be caught flat-footed. Only six people have appeared in court, charged with theft.

In the Western Cape, this week, a Muizenberg restaurant was firebombed by what Afro Voice called “illegal land invaders” – as opposed, presumably, to the “legal” land invaders that are punted by radicals. Cars were stoned, several buildings set alight and two councillors briefly held hostage.

The damage was about R8 million. Only two arrests were made.

These are only some recent, dramatic incidents. There are many more. They flare briefly in the consciousness of media.

Yet, cumulatively, they are pushing an unheeding SA along a dangerous path.

No government can indefinitely allow sustained, spreading public violence by its citizenry.

A Human Sciences Research Council survey in North West gives a glimpse of where we are headed. Fewer than a fifth of the respondents thought that peaceful demonstrations could bring change, while 13% endorsed violence.

Researcher Jare Struwig agrees this is a disturbingly high statistic in a democracy. “The government faces a real challenge since there are radical groups in politics that endorse the rhetoric of militancy and violent conflict.”

The ANC faces this challenge with its hands tied. As Professor Susan Booysen of the University of the Witwatersrand puts it in a Daily Maverick article: “This is a guilt-ridden government that knows it shares responsibility for failing its people.” For this reason, “it cannot afford to be seen acting against the poor”.

This is not a new phenomenon. The ANC has always been schizophrenic, with one group enacting legislation, while another will be marching against those laws, baying defiance.

But such an evasion of responsibility is no longer sustainable.

Unless the government summons the political courage to deal with violence, SA is fast heading for a tipping point.

Those vulnerable to easy scapegoating on account of their “privilege” – foreigners, the employed, ethnic minorities in general and white farmers in particular – should be especially worried.