The less-skilled and less well-off everywhere are susceptible to populism for the same reason: they believe they are being deprived of privileges by outsiders. 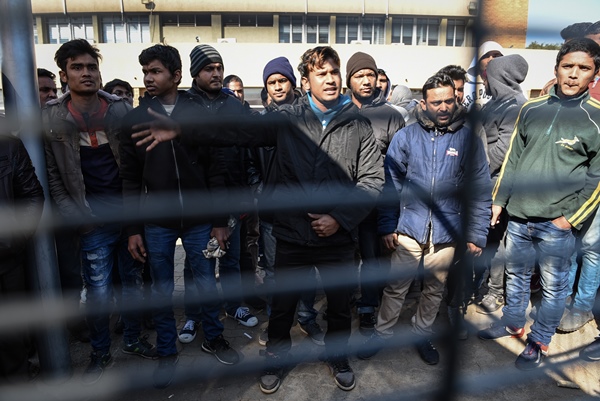 Foreign nationals, predominantly from India, are seen speaking to media through a fence at the Desmond Tutu Refugee Centre in Pretoria during a site visit by John Moodey, the provincial leader of the DA in Gauteng. The foreign nationals claimed they had to pay bribes just to gain entry into the center where they also allege foreigners are beaten and treated inhumanely, 11 June 2018, Pretoria. Picture: Jacques Nelles

Human migration is perhaps the biggest issue of the 21st century and across the globe it is driving a slew of governing parties to hasty policy about-turns.

The movement of masses of people across national borders has become politically unsustainable to the destination countries. The cost of compassion has caused a massive electoral backlash that has seen powerful establishment parties crumble in the face of populist anti-immigration upstarts.

The issue of mass migration has fuelled the rise of far-right nationalist parties across Europe. In the US, it was a major factor in Donald Trump’s victory.

But it is not only a right-wing phenomenon. In Britain, the anti-immigration sentiments that delivered the referendum vote for Brexit are as prevalent among Labour’s working-class voters as they are among the Tory’s Little Englanders.

In SA, it’s an issue on which the DA and the ANC are not far apart in policy. Both have been criticised for being xenophobic and isolationist.

Herman Mashaba, DA mayor of Joburg, had to apologise for a tweet in which he boasted of arresting a man transporting cow heads on an open trolley. Mashaba wrote: “We are [not] going to sit back and allow people like you to bring us ebola in the name of small business … ”

The Institute of Race Relations’ Gareth van Onselen said this fuelled hatred of “immigrants or informal traders, often regarded as one and the same”. The Human Rights Commission instituted an inquiry and virtually every group, from the EFF to Cosatu, got on the shaming bandwagon.

Interestingly, there was considerably less reaction to Health Minister Aaron Motsoaledi, who expressed far stronger sentiments in the same week. Speaking at a healthcare workers union summit, Motsoaledi said the “burden of foreign nationals” had nothing to do with xenophobia, but “was a reality”.

“Our hospitals are full, we can’t control them. When more and more come, you can’t say the hospital is full now go away … they have to be admitted, we have got no option. And when they get admitted in large numbers, they cause overcrowding, infection control starts failing.”

This earned Motsoaledi a rebuke only from the deputy public protector, Kevin Malunga. The IRR and HRC, Cosatu and the EFF were silent.

Leaders scapegoating minorities – be they foreign, gay, white or Muslim – is reprehensible. But, when it chimes with the deep-seated prejudices of those whose support you are dependent on, it’s pretty much irresistible.

Unfortunately, this is a behaviour pattern that is not particularly susceptible to reason. It doesn’t help to defuse xenophobia by pointing out there are probably no more than three million illegal immigrants in SA and, statistically, it is unlikely that they, collectively, are responsible for you, specifically, being unemployed.

Prejudice goes hand in hand with exclusion. The less-skilled and less well-off in Budapest and Johannesburg are susceptible to populism for the same reason: they believe they are being deprived of the privileges by outsiders.

The ANC is very attuned to this, hence the growing anti-immigrant tenor.

In the near future, migrants, whether they are Somalians or Zimbabweans offering skills, are likely to encounter a far chillier welcome.