The ANC is unable to self-correct

Ramaphosa is not incapable of fixing government. He is simply working from within a party that makes it impossible for him to do so. 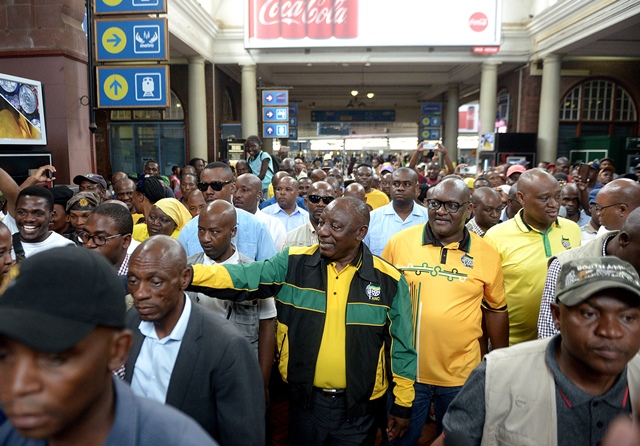 President Cyril Ramaphosa, centre, and Gauteng Premier David Makhura, to his right, arrive at the Pretoria train station during an election campaign ahead of the May 8 national elections, 18 March 2019. Picture: Thobile Mathonsi / African News Agency (ANA)

The ANC released its election lists for candidates who will serve as representatives of the party at the various levels of government should it win the upcoming May general election.

With the party having come in for serious criticism following damning revelations of massive corruption over the past decade, only one conclusion can be drawn from the listed individuals proposed for parliament: the ANC is incapable of its much-vaunted self correction that has been offered to the electorate as the cornerstone of its self-renewal process.

The Commission of Inquiry into State Capture is far from complete, but purely based on prima facie evidence, it is clear that an organisation that is self-correcting should not have corruption-tainted individuals on their lists.

Public Service and Administration Minister Ayanda Dlodlo is on record as saying that the names on the list are the result of rigorous democratic processes within the ruling party.

It is for this reason that it can be concluded that the “new dawn” promised by President Cyril Ramaphosa when he took over last year is simply a personal wish on his part and not the whole party’s collective strategy.

Former finance and home affairs minister Malusi Gigaba is on the list despite having been removed from parliament in the midst of multiple scandals. So is former youth league leader Collin Maine, who publicly admitted that he was a beneficiary of the Gupta’s state capture project.

And Minister of Environmental Affairs Nombula Mokonyane, who has not provided a convincing rebuttal to former Bosasa boss Angelo Agrizzi’s accusations that she received hundreds of thousands in cash from the company.

So many on that list are tainted in one way or another, yet the organisation’s internal democratic processes are suggesting they return to parliament.

The “new dawn” that Ramaphosa has been trumpeting cannot become a reality when individuals that were at the centre of what he once referred to as a “wasted nine years” are part of the ushering in of the supposed turnaround process.

Sadly, whatever goodwill the voters were willing to grant the ruling party on account of getting rid of former president Jacob Zuma is in the process of being eroded because the party is incapable of accepting that its internal processes do not work.

That Bathabile Dlamini and Gupta acolyte Mosebenzi Zwane made the list confirms that the ANC does what is good for the party first and foremost, relegating what’s good for the country lower down its lists of priorities.

It is not that Ramaphosa does not know that carrying along leaders who are tainted is not good for the party. He does.

The only conclusion that can be drawn from his endorsing a list containing problematic leaders is that his unmistakable will to move the country towards a place where corruption is enough to remove leaders from government is countered by his need to count on the support of the tainted individuals.

He is not incapable of fixing government. He is simply working from within a party that makes it impossible for him to do so.