The elections show the real state of the nation

For the DA, the results are unambiguously disastrous. Its vote will be less than the 22.2% it got in 2014 - a million short of what it was two years ago. 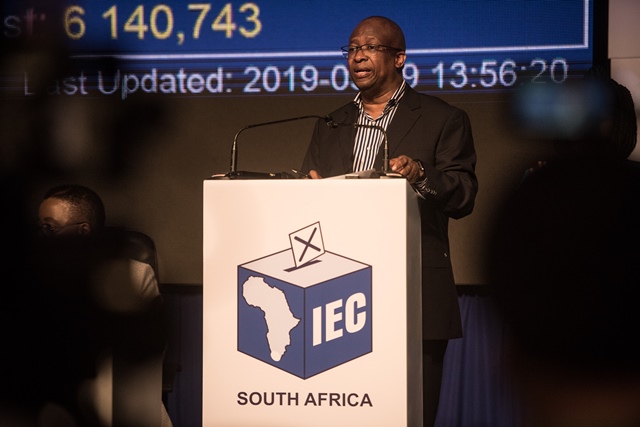 Chief Electoral Officer of the Electoral Commission Sy Mamabolo during a press briefing at the IEC ROC, 9 May 2019, Pretoria. Picture: Jacques Nelles

In bridge, a finesse is the triumph of cheek and desperation: when a trick is won by the canny play of a mediocre card which, in a simple assessment of relative strengths of the two sides, should have been lost.

In SA politics, a finesse is similarly a triumph by dint of nerves and opportunism. It’s when Cyril Ramaphosa, despite mediocre cards, snaffles the entire game against Mmusi Maimane, who sat down at the table with the strongest hand his team had yet been dealt.

The ANC went into the election with a disarmingly simple strategy: we know we have, in the past 25 years, failed you terribly, but vote for us again and we will set it all right. It was stunningly effective, with influential former critics all trilling seductively from the same hymn sheet: give Cyril a chance.

Given the ANC’s record over the past decade, one must conclude that South Africans are either endearingly trusting or astonishingly naive. It is certainly a reflection of the race-based nature of our politics, which is getting worse.

The ANC’s new-found enthusiasm for expropriation without compensation of white land and, increasingly, its slurs against exploitative white settlers, is the antithesis of the party’s nonracial heritage. The new note it strikes differs from the tone of EFF abuse of whites and Indians only in volume and pitch.

That racial template is further reflected in the growth of the Afrikaner-rights Freedom Front Plus (FF+), the resurgence of the Zulu-nationalist Inkatha Freedom Party (IFP) and the progress made by the black nationalist EFF.

The FF+ has tripled in size, benefitting from the exit of disenchanted white supporters from the DA. Bemused by this unexpected dividend, FF+ is now scrambling to position itself, implausibly, as a nonracial party.

In KwaZulu-Natal, the IFP, led by nonagenarian Mangosuthu Buthelezi, has more than 17% of the vote, allowing it to wrest official opposition status from the DA.

The EFF will be disappointed, but most of SA mightily relieved, that it has grown far less than the predictions. It moved from 6% to 10% but its growth in absolute numbers is less threatening: in 2014, it drew 1.2 million votes and this time around, a little more than 1.4 million.

Although the ANC will be relieved to have only dropped five percentage points, its position is tenuous. About 36 million were eligible to vote, of which only 26.7 million registered, of which 16 million – around two-thirds, down from 70% – turned out to vote, from which the ANC will draw well under nine million votes.

For the DA, the results are unambiguously disastrous. Its vote will be less than the 22.2% it got in 2014.

In 1999 to 2014, the DA vote grew from 1.5 million to four million, despite white emigration, its historical support coming from low-population growth minorities, and having leaders infamously insensitive to the racial euphemisms theoretically necessary for a party to grow.

Maimane was catapulted to the leadership of the DA, despite his relative youth and inexperience, in a calculated attempt to make the party more palatable to black people. It has failed dismally. This time, the DA vote will be a million short of what it was two years ago.

The one entity that should be licking its wounds and showing some remorse is the Electoral Commission of SA (IEC). This was the worst-organised election since the understandable chaos of 1994. Although the IEC failures probably made no significant difference to the result, next time we might not be so fortunate.