Not so fun being police minister now, is it, Bheki Cele?

SA is burning to the ground, and yet the minister and his hat are nowhere to be found. It's a bit harder when you're not just policing Sandton tannies. 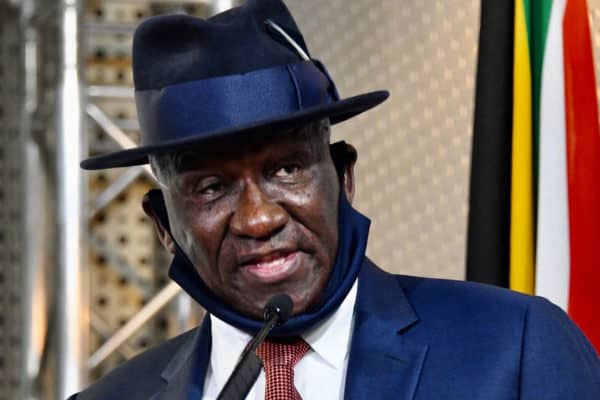 South Africa went to sleep on Sunday night after President Cyril Rampahosa extended the alert level 4 regulations for another two weeks, a little angry, I suppose. He is killing the economy. South Africa will struggle to recover after this. While restaurants were now allowed to have sit-in service, they maybe breathed a small sigh of relief. But what they didn’t expect would be, waking up on Monday morning, their businesses stripped to the bare bones.

ALSO READ: Bheki Cele rears his head: Looting, lawlessness will not get worse

Violent protests had erupted in KwaZulu-Natal over the weekend, and soon Gauteng was in the same violent boat. Even after Ramaphosa addressed the nation last night, lootings were still ongoing. People were looting a mall while he was addressing the nation. Clearly they didn’t care.

It has been four days since mayhem broke out in the country, and still Police Minister Bheki Cele is nowhere to be found. I have yet to see an interview of him warning looters how they will be faced with the full might of the law should they be caught breaking any laws. I have yet to see a statement from him on social media or anywhere else letting South Africans know he is on the ground with the SAPS protecting businesses, preventing further looting and arresting transgressors.

Why, Mr Cele, are you not at the forefront of operations like you were during lockdown level 5 last year when South Africans were too scared to have a ciggie in the car in case you asked us to produce a receipt for our smokes?

ALSO READ: PICS: Looting and violence in Gauteng and KZN

Let’s not forget the time when you set up major road blocks in December searching through people’s boots for alcohol, locking them up on the spot for transporting a couple of drinks they managed to pull together at home just to have a little bit of fun with friends for New Year’s evening. These weren’t even full bottles of alcohol – so you couldn’t use the excuse that they were on their way to illegally sell it.

So, forgive us for wondering where you are now, when South Africa is literally burning to the ground. Why are you not at the forefront addressing the media, addressing the nation, assuring us you’ve got this?

Why are you not on the front lines upholding the law with the same passion you did when you arrested poor Sandton ladies moving wine from their offices to their homes? They were harmless. They didn’t burn shopping centres to the ground. Neither did they break into Tops to steal the wine.

Why are you in hiding, Mr Cele? Why weren’t you on the front lines yesterday setting up major road blocks pulling off all the cars transporting looted goods, demanding receipts?

Where were you when a teenage boy was killed by a rubber bullet because you failed to uphold the law when it really mattered? When South Africans were in real danger, when people were fearing for their lives and livelihoods? Where were you, Mr Cele?

Were you leading the road block on Sandton drive where 25 officers were checking for expired licence discs yesterday while a shopping centre barely 1km from you was about to be looted? When a country is in the middle of a war? Where are your priorities?

Police officers were standing on the sidelines with their big guns watching people loot a mall and they did nothing. Private citizens eventually realised they needed to jump in and protect their businesses and communities themselves, because there would be no help from authorities.

You can’t even use the excuse of, “I didn’t know it was so bad” or, “We don’t know where these lootings are happening”, because there has been pretty much 24/7 news coverage of all the looting in South Africa. If you watched President Ramaphosa’s speech last night you would have seen how looters ransacked a blood bank. A blood bank, Mr Cele. You can’t say they are stealing because they are hungry. These violent protests and blatant disregard for the law go way beyond hunger. This is an uprising; an uprising you have shown you have no control over. An uprising you are clearly not planning to bring under control.

Will you show up with your fedora when there is nothing left to burn, telling South Africa that you fought tooth and nail to uphold the law in the country? Will you have a big conference when the air is still thick with smoke from businesses burning, telling South Africans you will do everything in your power to make sure justice is served?

We don’t believe you.