Residents accuse Urban Dynamics of failing to deliver on their promises to the community, which include building quality houses for the poor. 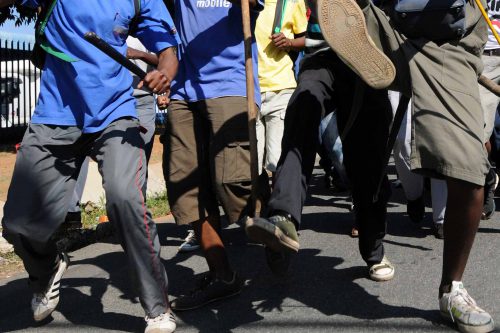 Frustrated community members of Freedom Park stormed the premises of town planners, Urban Dynamics in Milpark on Tuesday, decrying the lack of community beneficiation for the mainly informal settlement.

The area, known as the Golden Triangle, is home to over 4500 impoverished residents situated near numerous housing projects overseen by Urban Dynamics.

Since 2011, according to the residents, the developers have failed to deliver on their promises to the community, including the building of quality houses for the poor.

The protesters also wanted the community to benefit from the various projects around them in terms of jobs and contracts, which they said were only given to certain people or outsiders.

In their memorandum of demands, the Bambanani Global Forum of the Golden Triangle bemoans the ‘public display of riches in the faces of our poor communities’.

“We are extremely impoverished, ” the memorandum reads, “We (the community) will no longer tolerate this pattern of beneficiation in our community. ”

The residents demanded a meeting with the developers regarding the four remaining projects in the area which they say must be conducted so that their community benefits from it.

“We will make sure that there is no production until our request is met. Your response will determine whether projects continue or no in the Golden Triangle,” they said in the memorandum.

The protesters also told The Citizen that the community had approached government officials in the past about their housing crisis which they blame on corruption.

“We went to the mayor, we went to MMC (Mzobanz) Ntuli and (Gauteng Premier) Paul Mashatile to tell them that that we have more than 51 people with title deeds but their houses have been taken by certain people and those people are threatening to kill the owners. ” , said community leader Vusi Mkhabela.

“There are people who are 25 years old living in RDP houses while someone who is elderly is living in a shack on the waiting list.”

After much coercion, Managing Director at Urban Dyamics Hannes Potgieter received and signed the community’s memorandum, promising to meet with community leaders next week Monday.

He refused to speak with The Citizen.