'There are two versions of Sona and it shall remain like that until Zuma is out of office … Baleka must prepare for action.' 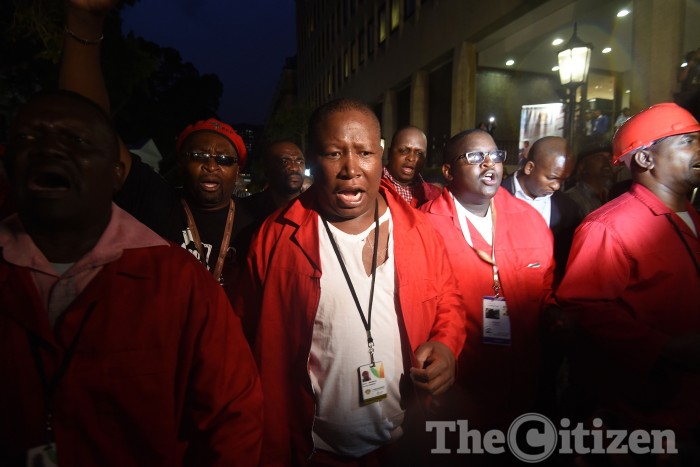 FILE PICTURE: EFF leader Julius Malema is pictured singing along with fellow party members outside parliament after being removed from the state of the nation address in Cape Town, 12 February 2015. Picture: Refilwe Modise

EFF leader Julius Malema has hinted at another state of the nation address (Sona) showdown next month, warning parliament’s speaker, Baleka Mbete, to be prepared.

The party has ritually disrupted most speeches by President Jacob Zuma in parliament since the landmark 2014 Sona showdown at which the party chanted “pay back the money” during Zuma’s address.

Answering questions about their plans for this year’s Sona at a press conference yesterday, Malema smirked as he remarked: “Well, you know Sona; there are two versions of Sona and it shall remain like that until Zuma is out of office. So you must be rest assured, Baleka must prepare for action.”

Noting that he was scheduled to appear at the Newcastle Magistrate’s Court on the day after the Sona, Malema said he was prepared to ditch the court appearance altogether, or negotiate another date in order to attend the Sona.

Malema is scheduled to appear on charges of violating the apartheid-era Riotous Assemblies Act of 1956. The two charges relate to him allegedly urging EFF supporters to invade land.

At the two-hour press conference, the EFF leader laid into various political figures, including outgoing African Union Commission chair Nkosazana Dlamini-Zuma, saying, should she be elected president of the ANC this year, it would be for the sole purpose of fronting for her ex-husband in a bid to prevent the 783 corruption charges he is likely to face after he leaves office.

Malema also called on the DA to allow the EFF to run the Metsimaholo municipality, which both parties would be contesting in a by-election this year.

He suggested that the party should vote the EFF into power in certain municipalities, as the EFF voted the DA into power in the three major metros won by the DA, with the EFF’s help, in last year’s elections.