Unusual patient shows up at vet

The young black wildebeest was only two days old when it was brought in. 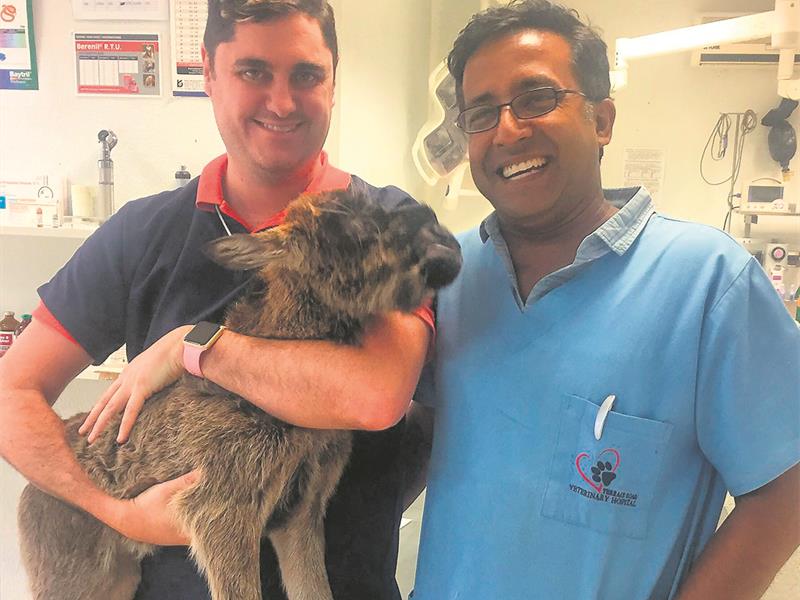 Edenvale veterinarian Dr Shabeer Bhoola, on the East Rand could hardly believe his ears when he was told a young black wildebeest was in the parking lot outside his rooms, waiting for treatment, Kempton Express reports.

Bhoola said despite assisting a number of exotic animals over the years, being told a wildebeest was awaiting treatment was a bit of a shock. “I almost did not believe it.”

He said the young black wildebeest was only two days old when it was brought to him on January 24. The calf still had its umbilical cord attached to it.

“One of the groundskeepers cutting grass at Modderfontein Reserve noticed the young calf lying in the grass.”

The calf could not walk and was very weak at the time it was brought to the hospital. Once examined, the initial analysis showed the animal was extremely dehydrated.

“The calf’s glucose levels were at zero, and its body temperature was very low.”

The calf soon stabilised after receiving fluids and some warmth at the veterinary hospital.

READ MORE: This is how these six Kruger camps got thier names

Bhoola said at first he felt out of his depth while helping a young wildebeest, but it did not stop him. He said over the years the Terrace Road Vet has built a good relationship with Wildlife in Crisis and was able to get assistance from them.

Judy Davidson from Wildlife in Crisis said Bhoola contacted the rehabilitation centre for additional assistance. “We fed the calf some colostrum at our facility, as it was very young.”

She said the young calf was returned to the reserve to be reunited with its herd on the same day.

“The calf was only with us for four hours,” said Davidson.

“Dealing with wild or exotic animals is not as uncommon as everyone believes,” said Bhoola. Before the Greenstone area was developed, there was an expanse of space for wildlife.

Support for GBV and abuse victims needs to be normalised, says expert
58 mins ago
58 mins ago

Support for GBV and abuse victims needs to be normalised, says expert
58 mins ago
58 mins ago