‘Superman’ Joost hangs on for dear life in ICU

He was diagnosed with motor neuron disease in 2011. 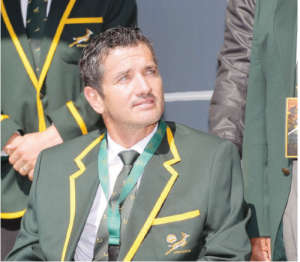 Springbok legend Joost van der Westhuizen, 46, who in 2011 was diagnosed with motor neuron disease (MND), continues to fight as “our Superman,” following his admittance to hospital at the weekend.

According to the Van der Westhuizen’s J9 Foundation, the former rugby scrumhalf and Springbok captain was taken to hospital on Saturday.

“The family and friends of Joost ask that you all pray for him. He was taken to hospital earlier today and is in a critical condition,” the foundation said on its Facebook page. We ask that you all please respect the family’s time at the moment. When we have updates, we will let you know. For now, we ask that we all bow our heads in prayer. The latest post yesterday was that Van der Westhuizen was in the intensive care unit, in a ‘critical but stable condition.’ He is responding well to his loved ones and putting up an incredible fight. He really is our Superman!” J9 wrote.

On January 30, the foundation addressed rumours on Van der Westhuizen’s condition, saying they caused him stress.

“There seems to be a lot of people out there who fabricate stories and share stuff without double-checking facts. They are adding to the problem. Please stop doing this. You cannot imagine the problems it causes for us and, more importantly, Joost and his family. The extra stress and admin, when it can be avoided, is selfish of those sharing these false stories.”

Last month, the Gauteng health department said it had joined forces with Van der Westhuizen in opening a clinic at Chris Hani Baragwanath Hospital, specialising in care for MND patients. There were no updates on Van der Westhuizen’s condition at the time of going to print.